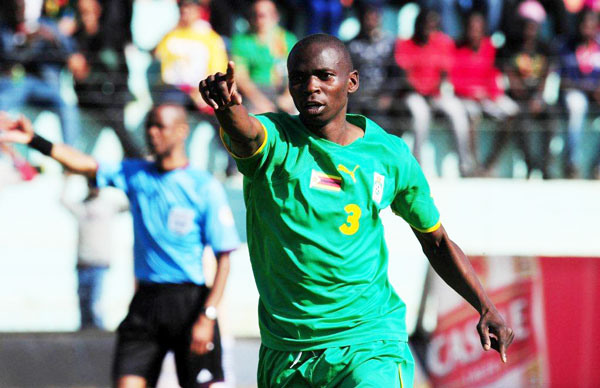 The defending champions, Zimbabwe booked their place in the semi-finals of this year’s edition of the Cosafa Cup with a 3-1 penalty shoot-out win over Malawi

LUSAKA-The defending champions, Zimbabwe booked their place in the semi-finals of this year’s edition of the Cosafa Cup with a 3-1 penalty shoot-out win over Malawi at the Nkoloma Stadium.

Both Zimbabwe and Malawi attacked each other early on, but Malawi looked hungrier for goals than their opponents.

Malawi nearly broke the deadlock in the  fifth minute after James Sangala’s header was cleared off the line from Fischer Kondowe’s well taken corner.

However, Zimbabwe found the back of the net in the 14th minute after a well played free-kick inside the Malawian penalty box, and it was Masimba Mambare who made no mistake to send the crowd wild.

Tendai Ndoro should have done better for the Warriors in the 27th minute, when he missed the target from inside the penalty area.

On 38 minutes, the Zimbabweans won a free-kick just outside the box, but the Flames of Malawi did well to deflect it for a corner.

The Warriors should have been 2-nil up before half time after some brilliant individual effort from Ocean Mushure, but the fullback couldn’t keep his shot on target.

Malawi were reduced to 10 men on the stroke of half time, when defender James Sangala was shown red for a second bookable offence on Zvirekwi.

Malawi made a double substitution in the second half to try and get an early equalizer, but Zimbabwe held on and gave them no space.

Gamston Simkonda tried from distance towards the hour mark and his technique was right, but it lacked direction.

The Flames wasted a few good chances to level matters, and they were nearly punished in the 73rd minute, only for Charles Sibanda to miss a glorious chance with only the keeper to beat.

Another opportunity for Malawi fell kindly to Josephy Kamwendo whose shot sailed over the bar with 10 minutes to go.

Ronald Chitiyo forced a brilliant save out of the Malawi keeper Simplex Nthala in the 83rd minute, as Zimbabwe looked to seal their spot in the semi-finals.