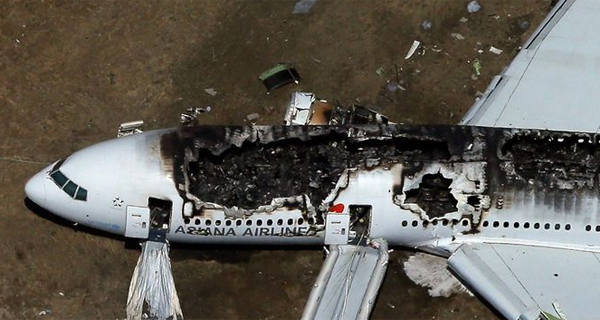 SAN FRANCISCO — An Asiana Airlines flight from Seoul crashed on landing at San Francisco’s airport Saturday, killing two passengers, injuring more than 180 and and forcing dozens of frightened passengers and crew to scamper from the heavily damaged aircraft before it was engulfed in smoke and flames.

There were 307 on board, including 16 crew. Officials said 123 escaped without injury and 181 were hospitalized or treated for injuries. Among the injured, 49 are in serious condition and five at San Francisco General Hospital, including a child, remain in critical condition. Among the 47 others at San Francisco General, several were treated for minor injuries, including fractures and abrasions, and were released Saturday night.

“It was all over in 10 seconds,” says Vedpa Singh, who suffered a fractured collarbone. “We heard a big bang, and it was over.”

The cause of the crash has not been determined, but the FBI has has ruled out terrorism. The Boeing 777 appeared to have touched down tail-first and short of the runway. A sheered off tail section rested several hundred feet from the main body of the aircraft, and debris from the plane littered the runway. Passenger Janghyung Lee told USA TODAY that the aircraft rattled wildly before landing.

The two people who died in the crash were found outside the heavily damaged jetliner. Fire Chief Joanne Hayes-White said late Saturday that she did not know the ages or genders of the victims.

The flight, which originated in Shanghai China before stopping in Seoul en route to San Francisco, was carrying 61 U.S. citizens, 77 South Koreans and 141 Chinese. All passengers and crew were accounted for by Saturday night. It took several hours to account for everyone on the flight.

“We’re lucky we have this many survivors,” said San Francisco Mayor Ed Lee.

It was the first fatal crash of a commercial airline in the U.S. since February 2009.

National Transportation Safety Board Chairman Deborah Hersman declined comment on whether pilot error caused the crash. “We have not determined what the focus of this investigation is yet,” she said before leaving Washington, D.C, with a crash site-bound team of investigators . “We will be looking at everything. Everything is on the table at this point.”

Hersman said the investigative team would look at all possible crash causes. “Obviously we have a lot of work to do,” Hersman said before departing Washington for the crash scene.

San Francisco International Airport was closed for several hours, with incoming flights diverted to other airports, before reopening two of four runways.

Facebook Chief Operating Officer Sheryl Sandberg said in an e-mail that she had been scheduled to take the flight, but switched to a United flight to cash in air miles for family members. “We are OK. My friend on that flight is OK, too,” Sandberg told USA TODAY.

Samsung executive David Eun, who was aboard the aircraft, was among the first to tweet photos and word of passengers. “Fire and rescue people all over the place. They’re evacuating the injured. Haven’t felt this way since 9/11.”

Asiana Airlines said on its Twitter account, “Our thoughts and prayers are with all the passengers, and flight crew on the flight. We hope to provide you with further info asap… We are currently investigating and will update with news as soon as possible.”

An Asiana Airlines flight from Seoul, South Korea, crashed while landing at San Francisco International Airport on Saturday. There were early reports of deaths and injuries, but the extent wasn’t immediately clear. (July 6)

Boeing said in a tweet from its corporate account: “Our thoughts are with everyone affected by today’s incident at SFO. We stand ready to assist the NTSB.”

Saturday’s crash landing was the first fatal accident involving a major commercial carrier in the U.S. since November 2001, when a American Airlines flight to the Dominican Republic crashed on takeoff in Queens, N.Y., killing all 260 people on board. The last fatal accident involving a commercial flight in the U.S. was Colgan Air Flight 3407, which crashed near Buffalo, killing 50 in 2009.