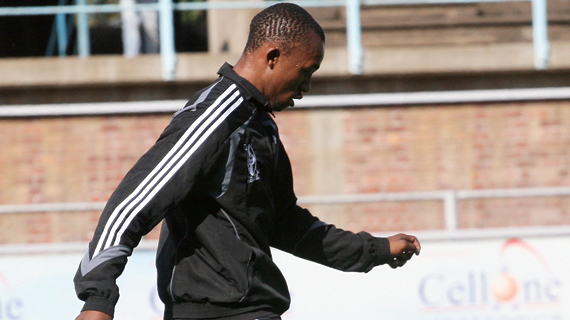 Bosso scrapped an important away victory to collect maximum points from Hwange and open a four-point lead at top of the Castle Lager Premiership log standings.

Milton Ncube weighed in with the solitary goal a minute before half time in a match that was delayed by 30 minutes, as visiting Highlanders had no reserve kit for their black shorts which clashed with Chipangano’s.

Former Hwange player Alick Nyoni came to Highlanders’ rescue and lent them red shorts from his Hwange Veterans, a social club in the coal mining town.

Bosso have maintained their stranglehold at the apex of the log standings with 29 points. Coach Kelvin Kaindu was happy with the three points away from home.

“I am happy we picked up maximum points going into the break, but we keep on committing too many fouls and we have to work on that,” Kaindu said.

His counterpart Nation Dube was disappointed with the number of chances wasted.

“Games are won by scoring goals. We had a lot of chances, but we failed to utilise them,” Dube said.

And if there is one thing that the country’s football fans have to learn is to desist from unruly behaviour for the sake of their clubs.

Victoria Falls referee Hardly Ndazi had to briefly stop the match in the 67th minute after fans from both sides almost stormed into the pitch from the scoreboard end after scenes of violence erupted.

Besides the unruly behaviour of the fans, who fought running battles with the police, the match in the field of play was clean, with Hwange mounting attacks from the onset.

But Bosso quickly settled in and the goal by Milton seemed to be always coming.

The score was engineered from the left by the speedy Bruce Kangwa, who cut in and fed Njabulo “Tshiki” Ncube who slid the ball to Milton who then blasted a grounder to the far post, beating Hwange goalkeeper Timothy Sibanda.

But it was Chipangano who could have broken the ice in the 12th minute when Chese dispossessed Kangwa on the right and spotted an unmarked Rusike who skied his effort with only busy Highlanders goalkeeper Ariel Sibanda to beat.

Hwange central defender Gerald Ndlovu then fouled Tshiki just outside the penalty box in the 24th minute, but midfielder Mthulisi Maphosa’s weak curler from the setpiece went straight into the hands of Sibanda.

In the 37th minute, Ariel fumbled a Rusike cross from the left and Siwela’s effort was cleared off the line by Kangwa.

Hwange came into the second half more determined and two minutes after the break, David Boriwondo’s header from a corner-kick was cleared to safety by Bosso midfielder Heritani Masuku.

Chese and Masame made some beautiful exchanges encroaching into the Bosso goal area and drawing Ariel off his line, but Rusike, in an effort to beat the advancing goalkeeper, skied his effort.