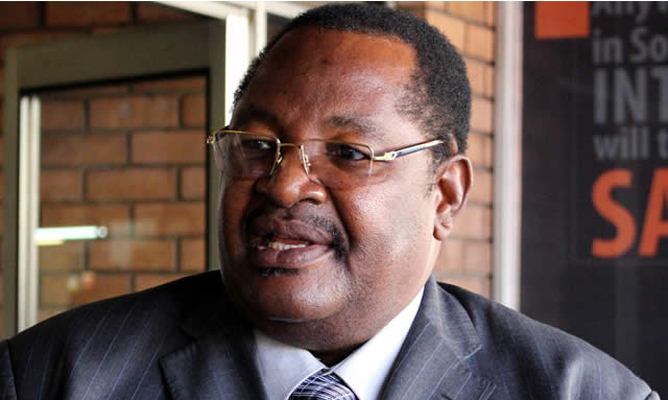 Zanu PF yesterday said it was more comfortable going to bed with Douglas Mwonzora’s pliable MDC-T and other fringe opposition parties under the auspices of the Political Actors Dialogue (Polad), but without Nelson Chamisa’s MDC Alliance.

ZIMBABWE’S two main political parties have expressed interest in the formation of a unity government to unlock the country’s long-standing political logjam, but seem to differ on implementation matrix.

Zanu PF yesterday said it was more comfortable going to bed with Douglas Mwonzora’s pliable MDC-T and other fringe opposition parties under the auspices of the Political Actors Dialogue (Polad), but without Nelson Chamisa’s MDC Alliance.

This coincided with the release of Afrobarometer’s survey report, which revealed that the majority of election-weary citizens were vouching for a coalition government to restore economic stability in the country despite that it’s only about 18 months before the next general elections.

The last time Zimbabwe was under a coalition government was between 2009 and 2013 when Zanu PF coalesced with the two MDCs, bringing economic and political stability to the troubled southern African nation.

“While I may not dispute the findings of the survey on the position of our supporters on coalition government, our party does not recognise the so-called opposition party led by Chamisa,” Mpofu said.

“We recognise the one led by Douglas Mwonzora, which is also supported by the dictates of the Constitution because it is the opposition with the highest representation in Parliament after Zanu PF.

“Coalition governance is a product of certain processes which should be taken into consideration. Zanu PF has always been open for dialogue and those parties which are earnest in addressing the socio-political problems which are affecting the country have heeded to the call.”

He added: “This resulted in the formation of the Polad where leaders of political parties discuss issues which relate to the type of government they want.  Zanu PF is the major political party in the country with the majority in parliamentary representation.”

He said his party was not under pressure for any coalition, but it was “out of President Emmerson Mnangagwa’s wisdom to extend an olive branch to all other political parties who lost in the 2018 elections”.

Chamisa’s spokesperson Nkululeko Sibanda said the opposition leader has always been in support of unity, but has remained principled so as not to sacrifice the gains of democracy just for the sake of joining hands with other political parties.

“President Chamisa has always been preaching the same gospel of unity,” Sibanda said.

“He wants a unified nation, just like his supporters do. But there is a difference between a genuine coalition and a bastardised one which we have in the country where a political party —  Zanu PF is dominating the so-called Polad just to further its interests to ensure a one-party State.”

He added Chamisa refused to join Polad because he did not want to sacrifice the will of the people, accusing its principals of being a bunch of useless people pursuing material benefits.

“Therefore, we are in agreement with our supporters who are opting for a coalition government because they are peace-loving, conforming to the party’s position, but we need political reforms for a level political ground to enhance democracy.”

Zanu PF has been accused of conniving with Mwonzora to decimate Chamisa’s party after the latter refused to recognise Mnangagwa’s victory in the 2018 elections.

Since Mwonzora took over as MDC-T leader, there has been speculation that Mnangagwa and Mwonzora were plotting to form a unity government to push for the postponement of the 2023 polls. Both have however, denied the claims.

But political analyst Ernest Mudzengi said by opting for a coalition government, citizens had lost hope for reforms under the Zanu PF regime.

“A coalition government is an alternative to usher in electoral reforms, but it is shortlived and temporary, as evidenced by the previous government of national unity.

“Calling for a coalition government is a sign of desperation. They are speaking from history where they saw a change during the unity between the now late MDC leader Morgan Tsvangirai and Robert Mugabe,” Mudzengi said.

The survey noted that the majority of citizens felt that the main opposition political parties should be part  of the broader coalition with the ruling party.

According to the report, 52% of respondents who are close to the ruling Zanu PF,  and 66% MDC Alliance sympathisers endorsed the idea of a coalition government.

The Afrobarometer interviewed 1 200 adult citizens in April this year in partnership with the Mass Public Opinion Institute (MPOI).

“Support for a coalition government is the majority position among adherents of both the ruling Zanu PF and the opposition MDC Chamisa parties, as well as among residents of all provinces,” the Afrobarometer report said.

“Two-thirds (66%) of Zimbabweans ‘agree’ or ‘strongly agree’ that the main opposition political parties should be brought into government to form a coalition with the ruling party in order to solve the country’s political and economic problems,” it added.