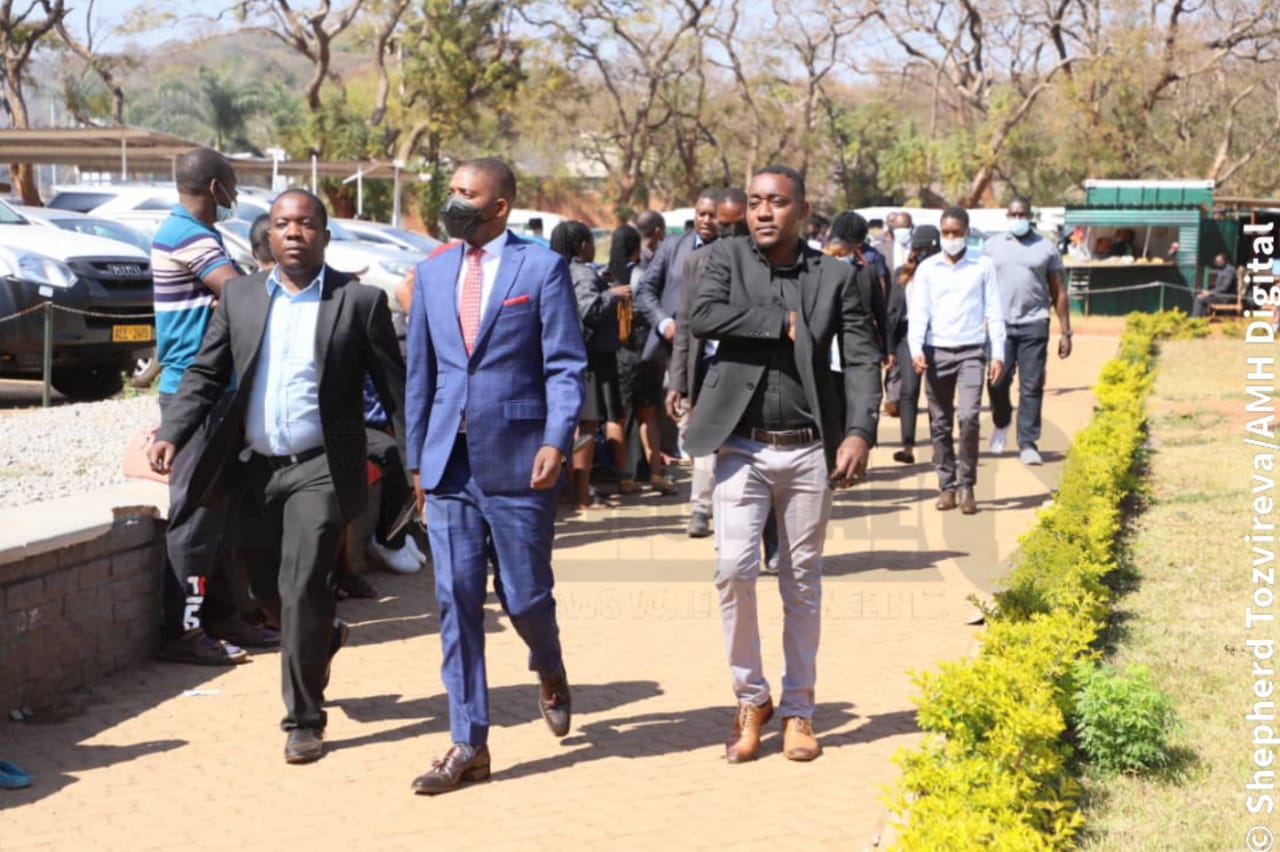 BY DESMOND CHINGARANDE ZANU PF Member of Parliament for Gokwe-Nembudziya constituency Justice Mayor Wadyajena who is accused of fraud and money laundering involving US$5,8 million appeared in court Wednesday and was remanded in custody to Thursday for bail application.

Wadyejena who is charged together with his company Mayor Logistics appeared together with Cotton Company of Zimbabwe (Cottco) managing director Pious Manamike, Maxmore Njanji, Fortunate Molai and Chiedza Danha, the director of Pierpont Moncroix Mauritius which was reportedly used as a conduit to defraud Cottco.

The four co-accused were also remanded in custody for applications today by Harare magistrate Stanford Mambanje.

Allegations are that sometime in 2019 the accused persons acting in common purpose hatched a plan to defraud Cottco of millions of United States dollars through fictitious purchase of goods purportedly for use by Cottco.

In pursuance to their plan and on January 28, 2019 they opened a shelf company Pierpont Moncroix (Pvt) registration number 898/2019 in which Danha and Euphrasia Mupedzisi are directors.

The requisition was signed by Manamike and Njanji on the same date. A comparative schedule of suppliers for the supply of the bale ties was raised by Molai where four companies namely Brown Engineering Group (Pvt) Ltd, a local company operating from 17 James Martin Avenue Lochinvar, Harare, submitted its quotation valued at US$2 005 416,17 dated January 21, 2019, Hebei Hanwu Cotton Machinery Co. Ltd based in China quoted the same supplies at US$1 439 984 quotation is dated January 22, 2019, Burmetal Turkey quotation dated March 7, 2019 was valued at US$1 307 881,77 and Pierpont Moncroix Mauritius quotation dated April 7, 2019 was valued at US$2 649 289,97.

#LATEST 🔴Gokwe-Nembudziya MP (@ZANUPF_Official) @JusticeMayorW remanded in custody to Thursday for continuation of bail hearing. Wadyajena has been charged with corruption involving US$5 million alongside 4 others and 2 companies pic.twitter.com/SLgFVaLTZW

A comparative schedule evaluating the four companies was done and Pierpont Moncroix Mauritius was recommended by Molai ahead of the other competitors to supply the Bale Ties at US$2 649 289,97 despite being the most expensive.

Thereafter and on March 15, 2019 Danha, acting in connivance with the other co-accused persons, sent an email to  Molai and attached to the email was a purported tax invoice from Giant Equipment LLC, USA a company domiciled in United States of America invoicing the same bale ties that had been previously awarded for supply by Pierpont Moncroix Mauritius. She further advised that payment was to be made to Giant Equipment LLC, USA.

Pursuant to their plan and on 20 March 2019 Manamike who is a signatory to Cottco CBZ Bank Foreign Currency Account authorised a foreign telegraphic transfer of US$1 896 000 to Giant Equipment PLC, USA.

In terms of the Exchange Control Regulations all foreign payments must be acquitted within ninety days which meant that the ninety days jin respect of payment to Giant Equipment LLC, USA was expiring in June 2019. On June 18, 2019 Manamike and Njanji originated a letter to CBZ Bank Head of Exchange Control Pearl House, Harare seeking extension of acquittal of payment made to Giant Equipment LLC, USA.

Attached to the letter to CBZ Bank was a purported letter from the Supplier Giant Equipment LLC, USA confirming that 16 containers of bale ties were sailing to Beira with the first four expected to arrive on 23% of June 2019, second batch by end of July 2019 and the last batch in September 2019. The letter to CBZ Bank was counter signed by Manamike and Njanji as authorised signatories and bale ties valued at USD280 000 imported by Prerpont Moncrorx (Pvt) Ltd and the payment that was made to Giant Equipment LLC.

Investigations established that no bale ties were exported into the country by Giant Equipment LLC, USA from the date of the transfer of the US$1 896 000 and the US$632 000 converted into Zimbabwean dollars, instead 25 Freightliner Horse trucks were imported into Zimbabwe by Giant Equipment LLC, USA between 2019 and 2020 and the importer is Mayor Logistics (Pvt) Ltd a company that is owned by Wadyejena and Mayor Logistics.

The 25 trucks have a combined invoice value of US$1 506 600. Further investigations established that all the twenty-five trucks are registered under Mayor Logistics (Pvt) Ltd.

Further investigations established that Giant Equipment LLC, USA does not specialize in the supply of Bale Ties but is into the supply of trucks and earthmoving equipment.

To date the payment to Giant Equipment LLC USA has not been acquitted since March 2019, and Cottco has been red-flagged by the Central bank.

On November 11, 2019 Manamike and Njanji acting in concert with the other co-accused persons and in furtherance of their defrauding scheme approved a second purchase order No 122448 to Giant Equipment LLC, USA valued at US$1 106 000.

In terms of the order, delivery lead time was stated as three months after a down payment of 40% and the balance before delivery. The purchase order was approved despite the fact that Giant Equipment LLC, USA had failed to deliver on the first order.

When the order was approved, Cottco had no money and the order was parked for nine months until the 31 of August 2020 when Manamike and Njanji approved processing of the order which was done in three (3) payment batches.

The accused persons acting in connivance raised and approved the fictitious Purchase Order misrepresenting to Cottco that they intended to buy bale ties from Giant Equipment LLC, USA for the 2020 Ginning Season and thereafter transferred the money in Zimbabwean dollars to a focal Bureau De Change Afrozurich International (Pvt) Ltd in a currency swap deal to the prejudice of Cottco as no bale ties were received from Giant Equipment, LLC USA.

On the third occasion and in October 2021 Accused 3, Fortunate Molai, acting in common purpose with her co-accused persons and in furtherance of their scheme forwarded an email to Memory Chivanga (who was acting treasurer at Cottco from May 2021 to January 2022) which she had previously sent to Accused 5 Chiedza Danha. In the attachment of the email was a signed purchase order No 124889 for bale ties dated October 19, 2021 to Prerpont Moncroix Mauritius amounting to US$4 578 078,50.

In her email she requested that Cottco Treasury advise on the payment of the deposit for the order. The deposit required was US$2 500 000. No physical paperwork was received by Cottco Treasury office and Treasury was only able to raise US$750 000 as a deposit which was paid through Cottco’s CABS account No. 1125257148 on the 15″ of November 2021 to Energy Park (Pvt) CBZ account No 23738610171 on the instructions of accused persons.

Investigations established that Energy Park (Pvt) Ltd is in the fuel industry and sells fuel in bulk and direct to retailers and not bale ties.

Payments to Maropafadzo Energy [Pvt] Ltd, being part of the order for bale ties were further transferred into various accounts of individuals and corporates both local and international for procurement of services which have nothing to do with the purpose for which the funds were transferred for at Cottco. No bale ties were imported from Pierpont Mauritius (Pvt) Ltd.