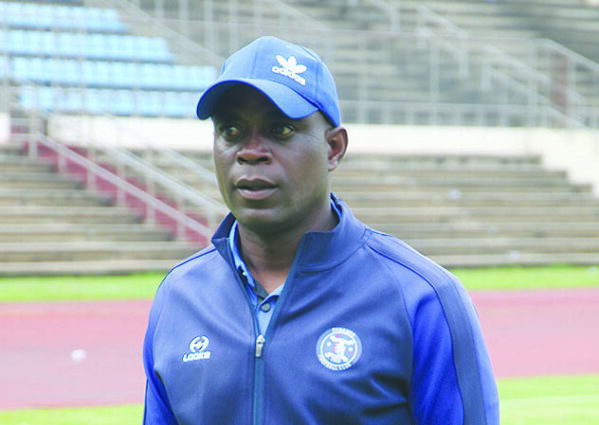 The log leaders’ stumble against Black Rhinos on Saturday saw their lead at the top of the log table cut down to six points.

BY HENRY MHARA DYNAMOS coach Tonderai Ndiraya is demanding perfection from his side in the remaining 10 matches as they aim to chase down leaders FC Platinum in the Castle Lager Premier Soccer League title race.

The log leaders’ stumble against Black Rhinos on Saturday saw their lead at the top of the log table cut down to six points.

With the Harare giants and third-placed Chicken Inn both winning their matches at the weekend, Ndiraya believes the title race is wide open although FC Platinum remain strong favourites.

Dynamos dispatched Tenax 2-0 at Vengere Stadium in Rusape on Sunday for their third straight victory, thanks to late goals by Ralph Kawondera and Emmanuel Paga.

“I have always said the race is still quite open,” Ndiraya said.

“We have 10 games to go now; it’s still open and a lot of things will happen in those games. There is going  to be lots of ups and downs but what we as a team now require is to be consistent in terms of trying to win all our remaining matches. Consistency is what we are slowly getting. We have won three times on the trot and that is very good. My wish is for us to continue doing that in the next matches to come so that we keep pace with FC Platinum and Chicken Inn. There are 30 points still to play for and that is quite a lot. We will try to concentrate on what we can control and what we can do. With six points (ahead) we would like to think FC Platinum are in the driving seat but the points are still there to fight for, so let’s see what happens in the next few weeks.”

Dynamos’ dramatic win on Sunday came a day after FC Platinum had been frustrated to a 1-1 draw by Black Rhinos at Mandava Stadium.

Ndiraya said that draw put his side under a lot of pressure to beat Tenax and close the gap.

“There is always pressure when people have higher expectations. That draw meant that our people were expecting nothing short of victory and the boys got into the game a little bit under pressure to get a result. And when you do that, playing after your rivals have played, you have some bit of pressure on you and that is what happened. Apart from that I feel the league break also played a part in our slow start. The performance on Sunday was not what we really got in the last games because of the break but in the end what is important is what we did, collecting maximum points.”

FC Platinum have gone on an eleven-match unbeaten run, winning nine of those  and Ndiraya admits that  the pace that the Zvishavane side is setting is relentless.

He knows one false step by the chasers is likely to hand the Norman Mapeza-coached side their fourth title in succession.

This is why he feels they may need to play perfect football in the remaining matches if they harbour any chances of overtaking the log leaders.

“There is no margin for error for us, but also no margin for error for FC Platinum as well as for Chicken Inn. But there are still a lot of games and in those ten games teams are going to make a lot of errors and points are going to be dropped here and there. We are not guaranteed of winning all the remaining games, neither are FC Platinum nor Chicken Inn, but I don’t want to speak on behalf of others, I’m speaking on our behalf. Errors will be there and we have to accept that but I want us to try and avoid the errors if possible.”

Next up for Dynamos is a trip to ZPC Kariba, but before that, they have a small matter to deal with — the Chibuku Super Cup match against WhaWha this weekend.

By Lavender Chabata Sep. 27, 2022
All set for Marume Classic return