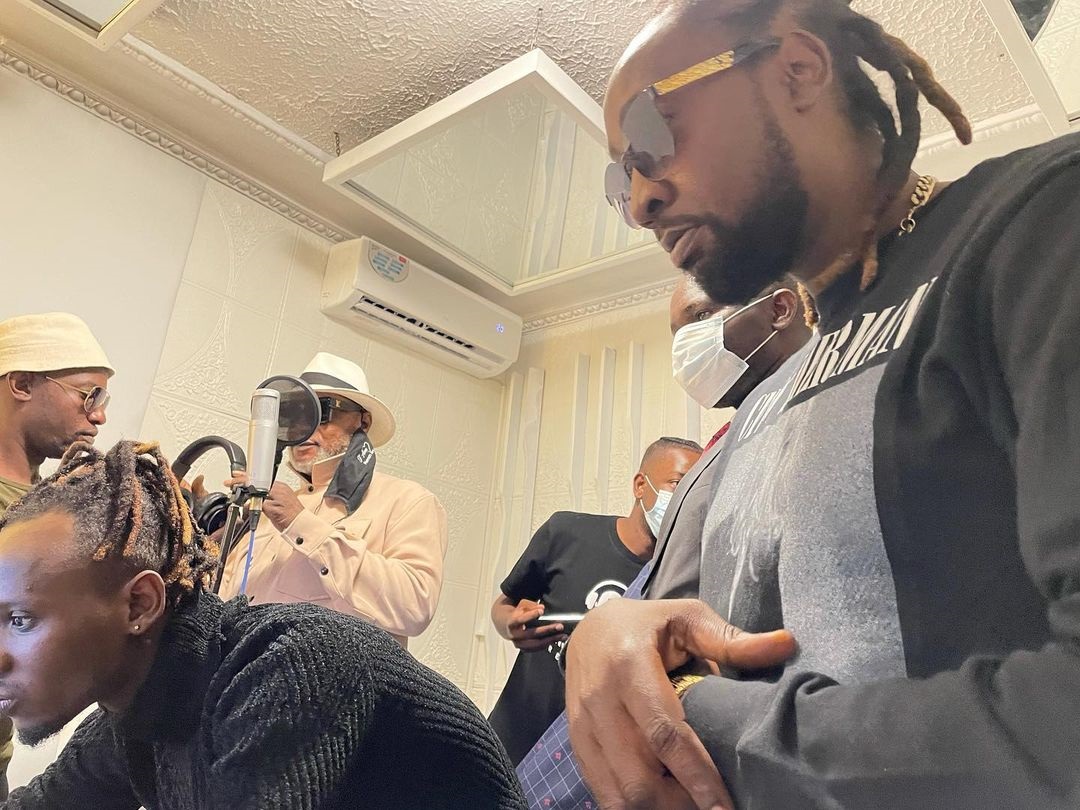 The song was produced by multi-talented Oskid at Passion Java Records.

The much-anticipated hit from Roki featuring Koffi Olomide and Ray Vanny was released today. As at 19:20 today, the song had 244,584 views Passion Java Records YouTube channel.

The song was produced by multi-talented Oskid at Passion Java Records. Passion Java has hinted on more collaborations that will feature Roki and other international artists. “Who can be the next project Roki ft Diamond or ft Burna Boy?” Java hinted on his YouTube channel.

Below are some of the reactions from fans across divide:

If anyone is offended by the insipid Kofi Olomide lyric, "ED Munangagwa, Number One", which he chants only once in his "Patati Patata" collabo with Roki & Tanzania's Rayvany, then they need a moral compass. The chant is dumb, but not offensive. Give #Roki a break, he deserves it! pic.twitter.com/MY4p4ZreW6

The song died before it was even heard😂😂😂

It is probably the most expensive music production in Zimbabwe, but because one name was mentioned in this song, yatofa yakarodha.😂😂😂

More importantly, it shows you how citizens hate tyranny and Corruption.

Me after listening to the Roki ft Koffie song👇 pic.twitter.com/VrI4hj82BB

No level headed person will like that Roki & Koffi song🚮 pic.twitter.com/hk1K28hN0z

I loved Simon Chimbetu but it was really sad seeing him evaporating because of his association with ZANU. From the heights of Pane Asipo to a muffled flop in Panorama 2. Kofi Olomide & Roki, have just marked their graves, at least in Zim! Mnangagwa is a rotten brand!

Akabhadharirwawo Roki veduwe, we can’t hate a song for things beyond his control

Thank you @PassionJavaRec for bring Koffi.

Was watching the Roki Koffi Olomide video on YouTube, I abruptly closed the laptop at 1:43 minutes when Koffi shouts " ED Mnangagwa" Nonsense!

The irony of choosing to shoot a video in squalor conditions in what looks like a squatter whilst hailing the people responsible for such poverty .More like poverty tourism with a shade of ignorance as toppings. Roki and Koffi ma streets arikuti hazviko pic.twitter.com/Q5bCfRX26K

Get back with your Ex or listen to Roki ft Kofi song???

😂that doesn’t sound like Roki though haaa i hope vakutiitusa https://t.co/9hyPnpDr1y

So , Kofi Olomide just came all the way from DRC to say "ed number 1, passion Java and Aaaaagh" till the song ends. Does he really know what that means to Roki and his resurrecting career? pic.twitter.com/FriEfu7V9m

I was willing to give this Roki and Koffi song a chance but the moment I heard ED Mna….#roki pic.twitter.com/RNL6YCmRlY

Roki has jus reversed all the progress he had made in his career come back.

Roki is a former big brother africa contestant and one of the most recognisable artists in Zimbabwe.

And after his song caught fire a month ago and is on 2.8 million right now, he is obviously hot right now. https://t.co/biYqjw1g8A

Last followed Koffi's music kuprimary, Roki made his last hit over 6 years ago, Rayvanny taisamuziva yet taendeswa kuYouTube kunovanzwa. Passion Java is exploiting the marketing gap that was in Zim music very well.

I love #Roki’s music and his come back was proving to be the best thing in 2021.

I also don’t blame him for the ED chant cz it clearly was not him who was pulling the strings. Therefore I will support him until he leaves Java pic.twitter.com/Mh1g91v5CF

Shanje, Roki wapisa, his song wl soon break records. You no more need live audiences to market yourself but social media such as YOU Tube etc wl do that for you. Roki chibabest. https://t.co/JoEeibkJar

I think you're making such a big deal out of nothing.

Kofi's songs are not suddenly going to be boring to Zimbo ears because he's chanted "Mnangagwa" on a record. And Roki came up playing at state galas anyway, that's how Zimboz came to love him.

That is the problem with opposition, we think throwing shade on something helps change the status quo but nope we need counter strategy not cheap dissing to work out our own salvation 🤷🏽‍♀️🤷🏽‍♀️🤷🏽‍♀️

So #CancelCulture warriors are you gonna cancel Oskid too for that Roki & Koffi song. You all know the boy never willed to sing about ED but then you like easy targets.Are you not the same people who thronged SouljahLove burial. Siyai mwana aise cash mupocket #FambaRokiFamba pic.twitter.com/OKZhPUmIYl

As the saying goes there is no such as bad publicity. All those hating on Roki ft Kofi are actually doing him a favor. FYI the video is over a 100K views in a space of 4hrs. Umwe acharara nebhutsu @Davidmuchuchu @joecharex @NtateRanaka @HarareNdini @daddyhope

We are right here we don't hide, we will look you in the face and tell you its us. Roki has sealed his fate for going into bad with ZanuPF. I can understand with 9children he needs every cent he can get i just hope he wont cry like Tambaoga in the near future.

iye achitadza zvemuharare ozoita global kupi 🤣🤣.40yrs + in parliament zimbabwe is in the pits…u actually sing bttr that roki and olomide for your supper..very impressive kip up the ass licking wek at least u getting paid for aiding him to loot and make pple suffer! https://t.co/H4qFgwDN0v

Let's set aside our social and political differences and appreciate the work done by Roki…He's putting Zim🇿🇼 on the map …..Zvinoda kutendwa🙏, Yes we know we have our own problems as a country but pulling each other down won't get us anywhere…Let's support local content

Lol when Roki went rural, none of you volunteered to pay rent for him. Today you talk about his career as if it matters. Whether he dies today or not he was a deadman seeking a lifeline. Siyai munhu achengete mhuri yake https://t.co/xXO6EiJlCq

Roki is trending more because of the controversy over his song than his musical genius. On the marketing side it has worked everyone is talking about the song. On the sustainability side it’s yet to be seen pic.twitter.com/qW8Fl20w71

This should be interesting to find out. Roki got himself into a very good collabo in his career, producer did too as they worked with Koffi but the money bankrolling them has the final say even on lyrics. #Capturedart?

I think the market will decide. thinkpieces are a waste of time. so far his numbers are wild.

People don't have complex reasons for listening to music except to enjoy it. Roki made an enjoyable song. And if it should choose to praise a politician like Americans do theirs, meh

Why @daddyhope is extremely mad😂. In over six months, his poor song dem loot only got 26k views. Compared to Rocky, in only 9 hours, his song has 231k views. Kana ndimiwo, ungasaita nyon'o😂😂😂😂😂Dzikama mbudziyadhura, u have no monopoly over anything and everything. pic.twitter.com/9r9OJiy4TX