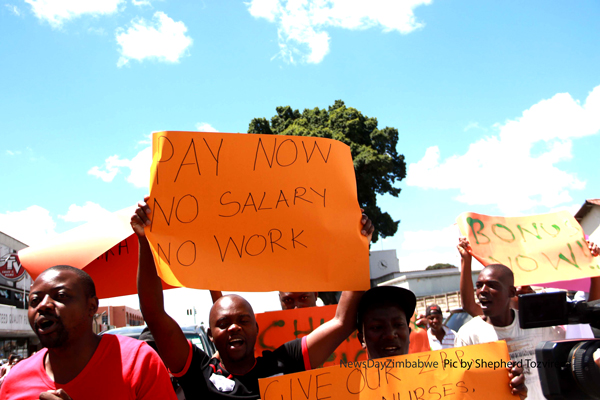 BY RICHARD MUPONDE TEACHERS have threatened to go on strike to force government to reverse its no-work no-salary policy against its workers who are claiming incapacitation. Labour unions representing teachers said the stayaway would force government to concede to their salary demands of a living wage of between US$520 and US$550 or the equivalent in […]

TEACHERS have threatened to go on strike to force government to reverse its no-work no-salary policy against its workers who are claiming incapacitation.

Labour unions representing teachers said the stayaway would force government to concede to their salary demands of a living wage of between US$520 and US$550 or the equivalent in local currency.

The decision by teachers comes after government this week said it would start implementing a no-work no-pay policy for absentee workers in response to a decision by the labour unions to report to work two days a week.

Government effected a 25% salary hike on teachers’ salaries this month, which saw the highest paid teacher earning $22 000, but unions have rejected the increment, demanding that government revert to the pre-October 2018 salaries of between US$520 and US$550 or equivalent in local currency.

In an interview yesterday, Zimbabwe National Teachers Union president Manuel Nyawo said teachers would escalate their fight for a salary review until government addressed the issue.

“We have decided to escalate our incapacitation fight. There’s no way we are going to rescind that decision until the employer addresses our grievances. We don’t care what they will do. If they want to kill us, they can kill, but we will continue to press on with our demands and our adopted decision of no pay, no work,” he said.

“It’s known that teachers are suffering, but the employer decides to entertain legislators who are earning up to $72 000, but teachers who are earning between $18 000 to $22 000 have to go through such a punishment of no work, no salary. What do they want to achieve with that?”

He said as teachers, they were not going to take the threats by the employer lightly, since the employer decided to punish them when they expected further negotiations.

“We haven’t been given the opportunity to meet the Head of State (President Emmerson Mnangagwa) who has the final say in the matter before they take the punitive measure. We are so much disappointed that government seems to be unwilling to really appreciate the good work by teachers for long. The reasoning to punish us for incapacitation is synonymous with cruelty on us workers,” Nyawo said.

His sentiments were echoed by Progressive Teachers Union of Zimbabwe, president Takavafira Zhou, who said they had two major options of mobilising to stay away or take government to court under section 165 of the International Labour Organisation (ILO).

“If government sticks to its no-work, no-pay policy, we are going to mobilise teachers so that there will be little activity in the schools and stayaway. We also have another option to file a court application under the dispute of rights in terms of Section 165 of ILO after government unilaterally reduced teachers’ salaries,” Zhou said.

“That will be only an urgent chamber application for it to be heard. So we are busy mobilising other teachers unions and our colleagues in the Apex Council to declare a deadlock and then file the chamber application. If we are discorded we will achieve nothing so we have to speak with one voice.”

However, Zimbabwe Teachers Association (Zimta) secretary-general Goodwill Taderera said they were still to consult with their membership on the direction to take.

“Zimta will continue to consult with its wide structures from grassroots level up to leadership. Zimta always holds meetings at all those levels that will feed into the national executive to give direction,” he said.

“So I wouldn’t know what Zimta will do because Zimta is the membership.”

On Wednesday during a meeting held in Harare attended by seven unions that represent teachers to deliberate on issues affecting the educators, the leaders agreed to seek legal counsel to ensure that they are not victimised for not reporting for duty due to incapacitation.