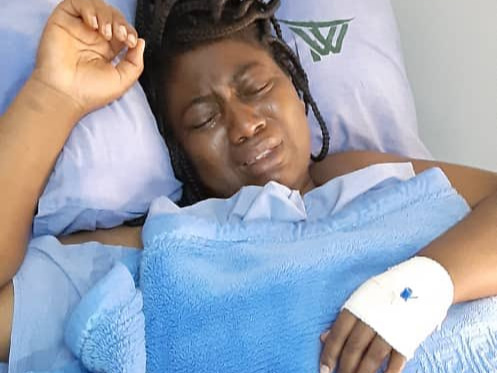 BY Desmond Chingarande POLICE yesterday stormed a private medical facility in Harare where MDC Alliance MP Joanah Mamombe (pictured) was admitted for mental disorder, arrested her using a disputed warrant of arrest issued on Tuesday and wheeled her to court. Earlier on, magistrate Bianca Makwande had rapped the State for abusing court processes by seeking […]

POLICE yesterday stormed a private medical facility in Harare where MDC Alliance MP Joanah Mamombe (pictured) was admitted for mental disorder, arrested her using a disputed warrant of arrest issued on Tuesday and wheeled her to court.

Earlier on, magistrate Bianca Makwande had rapped the State for abusing court processes by seeking an administrative warrant of arrest to illegally fish out Mamombe from her hospital bed.

But the State insisted on arresting her for allegedly boycotting trial in a matter in which she and her two co-accused, Cecilia Chimbiri and Netsai Marova, were supposed to answer to charges of filing a fake abduction report against State security agents early this year.Makwande briefly adjourned the proceedings and invited the State and defence to her chambers as the State insisted on bringing the legislator to court despite defence lawyers’ claims that she was sick and unfit to stand trial.

Mamombe’s lawyers wanted the warrant cancelled.The State, which has dismissed reports of Mamombe’s ill health, attempted to play a video footage recorded on September 4 to prove that she went on a shopping spree on the day she was said to be in hospital, but the magistrate shot down the request.

“This is a default inquiry on the warrant of arrest I issued yesterday (Tuesday). The CCTV footage was taken on September 4. How is this footage connected to the warrant cancellation?” Makwande asked.

The magistrate urged prosecutor Michael Reza to bring a proper application before her.

She told the prosecutor that it would be a miscarriage of justice to use her warrant of arrest to justify a motion court hearing at a private medical facility where Mamombe was admitted.

“I issued a warrant of arrest yesterday (Tuesday) and now you want to take the court to the hospital, which law are you basing on before we can proceed with the application?” Makwande asked.

Before Reza answered her, Mamombe’s lawyer Jeremiah Bhamu interjected, telling the court he had attempted to bring the legislator to court on Tuesday for cancellation of the warrant of arrest, but was blocked by police officers camped at the private medical facility.

“Your worship, the State is the one insisting on going to the medical facility. We tried to bring her to court yesterday (Tuesday), but the police refused her exit from the facility. The State now wants to force the court to the facility. She can physically avail herself in court, but is not in a position to talk,” Bhamu said.

After the meeting, police proceeded to the medical facility and forcibly took Mamombe to court without her doctor’s consent.

The State immediately invited Mamombe’s friend, Portia Makoni, who testified that the MP had been hospitalised since September 2 until yesterday when she was taken out of hospital by police.

Makoni said Mamombe was experiencing mental disorder.Psychiatrist doctor Fungisai Makombe-Mazhandu who examined Mamombe said she was mentally unfit to stand trial. “The medication Mamombe is taking takes two to three weeks for her to be back to her normal senses and she would be admitted at the Borrowdale facility. Mamombe is only allowed to leave the facility upon discharge and she is yet to be discharged,” she said.

“Her presence in court could stress her psychologically and she is unable to attend court due to a disorder that reduces concentration, blackouts and racing thoughts. She is slightly sedated due to the medication she is on, which requires her to be asleep most of the time and is due for review after two weeks.” But Reza disputed the doctor’s version, saying her assessment could be changed if Mamombe sees another doctor.

Makwande then cancelled the warrant of arrest, saying the court had no reason to doubt the doctor’s assessment as Reza unsuccessfully attempted to file another application for Mamombe to be examined by a State doctor.

The magistrate postponed the matter to September 22 and asked the State to propose another date for the application since Mamombe’s lawyers needed to be furnished with the State’s papers before preparing their defence.