Coup: ‘No smoke without fire 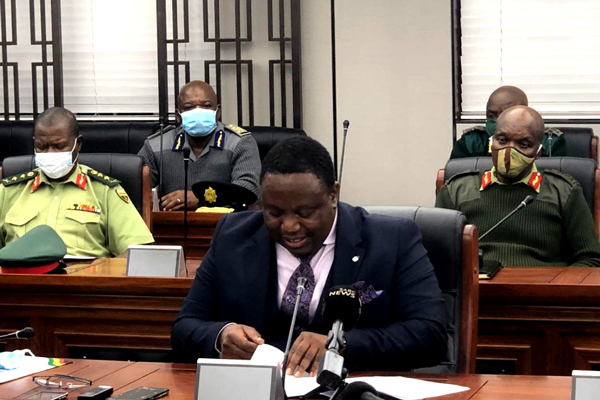 THE unprecedented move by the country’s Security ministers to call a Press conference to debunk “coup rumours”, on Wednesday, has exposed fissures and mistrust in President Emmerson Mnangagwa’s government, political observers have said.

THE unprecedented move by the country’s Security ministers to call a Press conference to debunk “coup rumours”, on Wednesday, has exposed fissures and mistrust in President Emmerson Mnangagwa’s government, political observers have said.

Home Affairs minister Kazembe Kazembe (pictured), flanked by Defence minister Oppah Muchinguri and service chiefs was at pains to assure the nation that a repeat of the November 2017 coup was not going to happen.

But analysts and Zanu PF sources yesterday confirmed the panic within government over the possibility of a coup.

Political analyst Eldred Masunungure said the statement by Kazembe, flanked by key security personnel was clear indication that a coup was brewing.

“Rumours of an impending coup have been brewing for some time.

You remember the bomb blast in June 2018. I think things have reached tipping point.

It is naïve to deny the prospect of a coup” Masunungure said.

“But when a minister flanked by security chiefs holds a news conference, it indicates there is something brewing and this was just meant to preempt the coup or coup attempt.

“But I don’t think the Press conferencehas cured the conditions giving rise tothe coup. Zimbabwe is flammable andthe ingredients of a coup exist.”

Mnangagwa, his two deputies and top party officials survived a bomb blast during a campaign rally in Bulawayo ahead of the June 2018 elections and his allies have blamed the President’s colleagues for wanting to kill him. “I don’t think the rumour will go away, even if it goes away, the plan may not necessarily go away. It may be shelved, but it will not go away. It is unusual for security chiefs and ministers including that of Defence to hold a Press briefing like they did.” Masunungure said implicating the opposition was a way of trying to justify a planned clampdown on government opponents.

Another analyst Rashweat Mukundu said the statement showed signs of panic in Mnangagwa’s government over a possible coup. He said the developments were a reflection of internal instability in Mnangagwa’s government. “There is a clear lack of self-confidence in this government. You cannot hold a Press conference to dispel rumours of a coup that is not known to the people but is only known to themselves,” Mukundu said.

Mukundu said mentioning a coup and implicating civilians, including church leaders and the opposition was only a cover for justifying a clampdown on Mnangagwa opponents.

Zanu PF sources said there was genuine fear in Mnangagwa’s camp that his deputy Constantino Chiwenga’s allieswere plotting his ouster in cahoots with former Zanu PF officials under the G40 banner.

Jealousy Mawarire, spokesperson of opposition National Patriotic Front, said it was Mnangagwa, through his Lacoste faction, fronted by Kazembe, who held the Press conference in front of mute, disinterested and tethered army generals, unhappy with the rampant looting of national resources by the First Family and their “criminal associates”.

He claimed that the generals were unhappy because Mnangagwa dispatched Finance minister Mthuli Ncube to the International Monetary Fund claiming there could be a coup if the country did not get funding.

Sources within the party revealed things were turbulent in Zanu PF, coupled with gross indiscipline in military camps as the economy continues to take a toll on their earnings.

“In fact, the whole Press conference was targeted at Chiwenga, that is why Kazembe from nowhere tries to say the President was in good books with his deputies.

“Why mention Mnangagwa’s deputiesas if they had been accused of plotting a coup? The statement all but exposed the plot,” a party insider said yesterday.

According to the insider, there have been growing tensions between the military and the civilian side of government.

Inside the party, most Mnangagwa loyalists were disgruntled by the level of corruption by the First Family while most people who sacrificed their lives for him were not protected.

“There is a feeling that it is only Mnangagwa and his family that have the right to benefit. The level of corruption and impunity by Mnangagwa’s sons and top allies is a cause for concern,” he added.

Observers said the fact that Mnangagwa had failed to resuscitate the economy and end corruption reportedly manifesting even in his own family has angered the military and the international community who now see him as a liability.

Mnangagwa has been alive to a possible coup even before elections and told his central committee in the run up to the 2018 elections that some MPs in his party were working towards impeaching him.

Meanwhile, the MDC Alliance yesterday claimed it was under siege from Mnangagwa who wanted to decimate it and create “one-party rule.”

Party spokesperson Fadzai Mahere said the attack on party leaders and linking others to an “imminent” coup to oust Mnangagwa was a declaration of outright war to effectively silence the opposition. She said Mnangagwa was now “at war with citizens.”

“The Joint Operations Command’s statement strikes at the heart of democracy in Zimbabwe and is the latest in a series of co-ordinated and incessant attacks on the MDC Alliance,” Mahere said.

So far, more than 20 MDC Alliance leaders have been dragged to court on spurious allegations this year.

“The world must be on notice that, as the national crisis deepens; the State is at war with its citizens. The continued erosion of our rights and freedoms signals a clear intent to return the nation to a oneparty rule,” Mahere said.

Sikhala, who was implicated in the coup plot yesterday (Wednesday), said he was a democrat and linking him to a coup by the Zanu PF regime was “desperation.”

“It was surprising that Kazembe Kazembe in his lack of understanding of my persona threatened my person in the company of our national security service chiefs who are the people’s final line of defence,” Sikhala said.

“He stated that myself and my exiled brother Saviour Kasukuwere peddle lies about an imminent coup in our country.

This statement is not only a lie but delusion of grandeur. I am grounded in the people and believe in people power, not any other force.”

He added: “It is cowardice to try and silence everyone into submission when our country is being looted dry right in our eyes.

“The resources in our country belong to every Zimbabwean. They are not there for the loot of the few. I represent that voice of a starving soul throughout Zimbabwe. Our people are suffering.