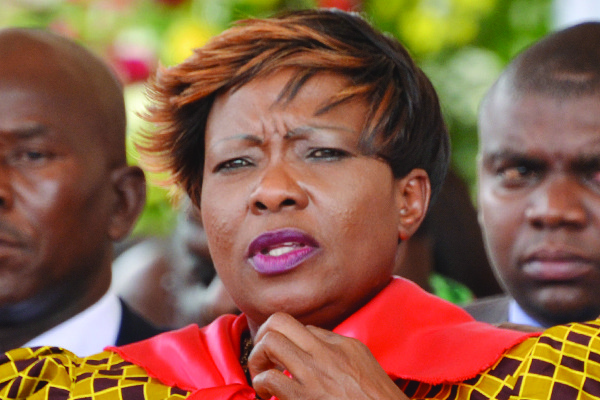 FIVE security details travelling in a convoy with First Lady Auxillia Mnangagwa were involved in an accident which left one person dead and four critically injured when a vehicle they were travelling in overturned in Muzarabani yesterday.

FIVE security details travelling in a convoy with First Lady Auxillia Mnangagwa were involved in an accident which left one person dead and four critically injured when a vehicle they were travelling in overturned in Muzarabani yesterday.

The four security details were air- lifted to a local Harare hospital but details were sketchy at the time of going to Press.

Security sources, who attended the scene, said one of Mnangagwa’s aides was killed in the accident. The details of the aide were provided, but this paper thought it prudent to withhold them while awaiting official confirmation.

The sources told NewsDay Weekender the accident happened after the driver failed to negotiate a curve and rolled down a steep embarkment before hitting a tree as the convoy sped to Muzarabani for a COVID-19 awareness campaign that was supposed to be spearheaded by the First Lady.

“The Toyota Hilux overturned soon after Mavhuradonha Range,” the official told this publication but declined identification as they are not allowed to speak to the Press.

The source said police details rendered first aid to the victims at the scene before taking them to a clinic in Muzarabani where they were transferred to Harare by an airforce helicopter scrambled from Harare.

“We rushed to the scene where we rendered first aid before taking them to Muzarabani Clinic where they were treated and because of their condition had to be evacuated to Harare by air.”

Mnangagwa reportedly abandoned the journey following the accident and sent representatives to donate food hampers and sanitisers at Chidikamwedzi and Kabatamukombe primary schools in Muzarabani district.

“I am still trying to confirm the issue you raised with me, so far I have not managed to get feedback, so once I get anything, I will be able to come back to you,” he said.