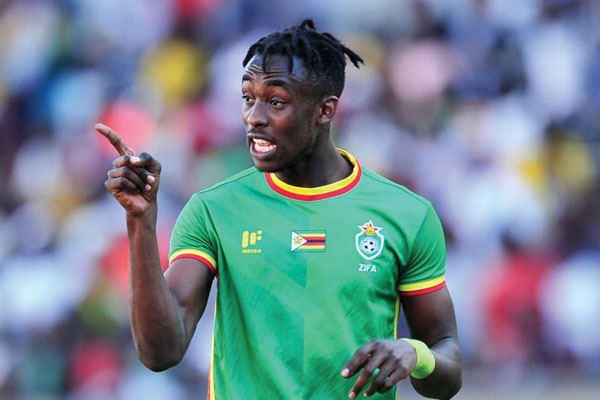 The 24-year-old Kadewere was yesterday expected to have his medical at the Ligue 1 side before completing a €15 million switch from Ligue 2 team Le Havre on a four-and-half-year contract.

The huge fee that the French giants agreed to pay for Kadewere is the biggest transfer fee ever paid for a Zimbabwean footballer.

Kadewere will remain at Le Havre on loan until the end of this campaign, and will only join his new paymasters at the start of the next season.

Garcia yesterday spoke about the new arrivals at Olympique Lyonnais, popularly known as Lyon at the club’s press conference ahead of their match against Toulouse tomorrow.

He heaped praise on Kadewere and Karl Toko-Ekambi who joined on loan from Spanish side Villarreal.

Asked about Kadewere, Garcia said, “He should commit to the club in the next few hours. He is a good player with great potential. He must continue like this at Le Havre. Kadewere, this is the future. I insisted that we take an attacking player. We didn’t need two. It’s a wise decision to leave him (at Le Havre) until the end of the season.”

Le Havre reportedly insisted on taking the player back on loan for the remainder of the season during the transfer negotiations because they are fighting for promotion to Ligue 1 and they fear that losing their star striker would disrupt their season target.

Kadewere becomes the fourth Zimbabwean who has joined a team playing in one of the top European leagues.

Others include Marvelous Nakamba who plays for English Premiership side Aston Villa, Marshal Munetsi who turns out for Stade Reims in the French Ligue 1 and Warriors striker Knowledge Musona, who just joined Belgian league side CAS Eupen on loan from Anderlecht.

This development is good news for Warriors fans who want to see more Zimbabweans playing at a higher level in world football.

Kadewere is hot property in France at the moment after his impressive goal-scoring record this season for Le Havre, where he has netted an impressive 18 goals in 20 games as well as providing four assists to lead the goal-scoring chats in Ligue 2.

Bundesliga side Eintracht Frankfurt and Turkish giants Galatasaray and Besiktas, as well as Spanish league side Real Valladolid are some of the major clubs that also reportedly inquired about Kadewere.

It is Lyon though who managed to outbid their rivals after reportedly tabling a salary offer of US$43 000 a week.