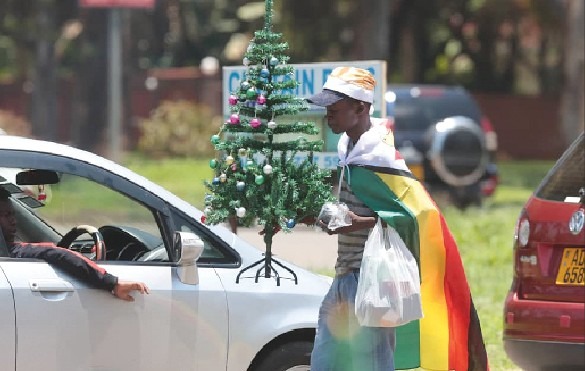 CHAOTIC scenes characterised Christmas Eve as thousands of people jostled to get cash from their banks to finance their travelling, food and other necessities, but were left disappointed.

CHAOTIC scenes characterised Christmas Eve as thousands of people jostled to get cash from their banks to finance their travelling, food and other necessities, but were left disappointed.

A survey by NewsDay in Harare, Bulawayo and other cities witnessed the rush for cash, which however, was in short supply, making it one of the worst ever festive holidays in independent Zimbabwe.

While government ministers and officials took time to rest either at their farms or on holiday in foreign lands, long queues at the banks characterised the Christmas Eve, with many saying they were failing to travel to their home areas because they had no cash, while shopping in a hyper-inflationary environment was proving to be difficult.

Motorists were queuing for fuel, which is in short supply across the country, while some workers had to endure the festive holidays without salaries.

Those who spoke to NewsDay said there was nothing to celebrate this Christmas because of the crises.

“We cannot say there is a festive season this Christmas because I cannot afford to buy anything. I am even struggling to buy basic commodities. Prices have been rising drastically and my salary is not tallying with the prices. I also have to be preparing and saving for school fees for my children, therefore, I am only buying few things and focusing on 2020 basic needs,” Nomsa Mapara, from Harare, said.

Spiwe Chuma, a vendor, also said she could not tell if it was Christmas or not because she was just trying to make ends meet.

“Hatina chatinacho (we have nothing). Things are not adding up. I’m only a vendor and there is no profit,” she said.

Small business and boutique operators said the festive season had been a let-down and were facing huge losses.

“Compared to last year, this year’s sales are low. Last year around the same time, we could not be entertaining anyone because this place would be packed with last-minute customers. Business is generally low and we are not expecting to make much profit. After today, we are not looking forward to making any profit,” Joachim Tamburai said.

The Zimbabwe Congress of Trade Unions confirmed that a number of workers were going for Christmas empty-handed after their employers failed to pay salaries.

Most parts of Harare were without water and electricity ahead of the holiday, killing the celebratory mood.

Harare’s ward 16 councillor, Denford Ngadziore, fumed at council management for failing to plan ahead of the festive season, a situation that has led to Harare’s taps running dry.

“Failure to have water in most suburbs in Harare during the festive season is a clear testimony of failure to plan by the council management. Heads must roll. Someone should be answerable and accountable,” he fumed.

“When we closed last week at the last full council meeting, we were promised that all was well, both workers’ salaries and the water situation. This is pure negligence and incompetence and what is surprising is there is no official statement explaining the situation to residents.”

Despite all the pessimism and lamentations, President Emmerson Mnangagwa yesterday claimed he was fully aware of the people’s suffering.

“I know that many of you still suffer. I am not blind to your situation, nor am I deaf to your cries. I commit to you that we will continue to reform with an eye on the long term; for we must not reform only for ourselves, but for our children and our children’s children,” he said in his Christmas message.

“We are undertaking deep, broad and meaningful reforms. We have put the economic fundamentals in place. We have balanced the budget. We are engaging the world. We are continuing to open up the political and media spaces. We are clamping down on corruption. And we are building a new Zimbabwe (in which) the people come first.”

“Let us focus on how best we can look after our families, our communities and our nation. How we can make Zimbabwe a better place for all,”he said.

“I wish you all a peaceful and merry Christmas. God bless you all and God bless the nation of Zimbabwe.”