MDC reaches out to African Union 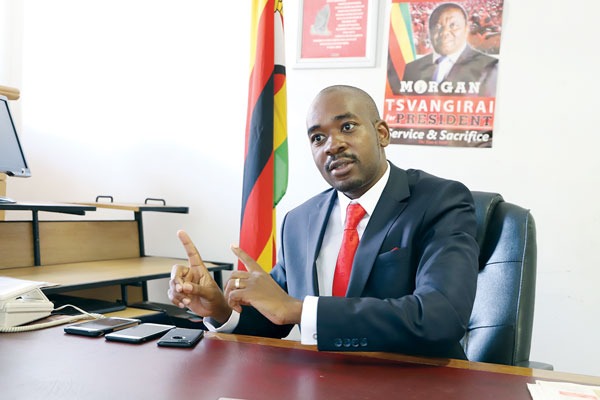 ZIMBABWE is facing a major socio-economic and political crisis which, if left unchecked, can spiral out of control, resulting in the loss of lives, the main opposition MDC has said in a cry to the Africa Union (AU).

ZIMBABWE is facing a major socio-economic and political crisis which, if left unchecked, can spiral out of control, resulting in the loss of lives, the main opposition MDC has said in a cry to the Africa Union (AU).

MDC deputy spokesperson Luke Tamborinyoka said the MDC had reached out to the AU in a diplomatic missive, saying the continental body has to act before things spiral out of hand.

“We believe that the Zimbabwean situation provides a test to Africa, particularly in respect of the deteriorating human rights situation in the country. Citizens are not safe. Several people have been abducted, others have disappeared, while the citizenry are generally not safe in their homes, particularly democracy and civic activists,” Tamborinyoka said.

“As Africa, we cannot just criticise the UN Security Council and its exercise of the right to protect. Granted, there were excesses in respect of the principle of R2P with reference to Libya in 2011, but Africa must be seen to be protecting its own citizens,” Tamborinyoka said.

“In the true spirit of African solutions to African problems, the ED (Emmerson Mnangagwa) regime in Zimbabwe must be held to account. The ED administration has brutalised citizens and it is time Africa takes a stern position. The AU has moved from non-interference to non-indifference and our brothers and sisters on the continent cannot just watch while citizens are brutalised and harassed by their own government when they have adequate legal safeguards to take action.”

In its letter to the AU, which is yet to be delivered, the MDC called on the continental body to abide by Article 4(h) of the AU Constitutive Act, which grants it the right to intervene in a member State in respect of “grave circumstances”.

“Grave circumstances are an apt summation of the situation in Zimbabwe. It is our humble submission that there are crimes against humanity being committed by the State in Zimbabwe, given the abduction of innocent citizens, the proscription of the right to demonstrate and the callous murder by State security agents of over 20 citizens on August 1, 2018 and in January 2019,” the MDC said.

“The Motlanthe Commission and the Zimbabwe Human Rights Commission have held the State culpable for the callous murders of innocent Zimbabweans in the past one year.”

The MDC said in the African context, there is nothing called sovereignty, because Zimbabwe’s citizens will end up in their countries seeking economic and political refuge.

“In any case, our African history and experience is against the notion of sovereignty, which has become the perfect excuse for murderous regimes such as the Mnangagwa administration in Harare,” said the opposition party.

“In Africa, if you brutalise your wife and children, neighbours and relatives have a right to intervene, storm into your yard and even break your house windows to protect children and wives from violent husbands. That must have been the reason why the AU adopted the principle to intervene, which sadly it has not exercised.”

Information permanent secretary Ndavaningi Mangwana said citizens had the right to write letters to whoever they feel like.

“They have already written many letters before and it’s really their business. This is not the first letter they have written to the AU. They have also written some letters to Sadc. They even went as far as writing to Banjul. I am sure they find this as an amusing pastime,” Mangwana said.

“When they want to engage other Zimbabwean political actors, they will find the Polad (Political Actors Dialogue) door open for them. For many, given a choice of either writing letters to outsiders and speaking to your compatriots, is a no-brainer.”

He said there was no unfolding crisis in Zimbabwe unless “they (MDC) are brewing a crisis we are not aware of”.