Hong Kong (CNN) — For the third time in less than a week, Hong Kong protestershave taken to the streets over a controversial extradition bill with China.

Hundreds of mostly young people surrounded police headquarters in the city’s Wan Chai district Friday, after blocking several roads in the area and near government offices in Admiralty, where they had been staging a sit-in demanding the city’s chief executive, Carrie Lam, resign and officially withdraw the bill.

Taking a major role in Friday’s protests was Joshua Wong, the former Umbrella Movement who was this week released from prison.

Pro-democracy activist Joshua Wong speaks to protesters outside the police headquarters in Hong Kong on June 21, 2019.

Speaking to reporters, a police spokeswoman called on protesters to leave the area, but said a “clearance operation” was not planned.

“We respect the rights of the public to express their views in a peaceful manner,” she said, adding a negotiation team would meet with protesters in an attempt to get them to move on.

Lam issued a rare public apology Tuesday, saying she was “sincerely sorry” for the controversies around the bill, which has seen multiple major protests, including consecutive marches organizers said attracted more than 1 million and 2 million participants respectively.

“I have heard you loud and clear and have reflected deeply on all that has transpired,” she said. “The concerns over the last few months have been caused by the deficiencies of the (Hong Kong) government.” 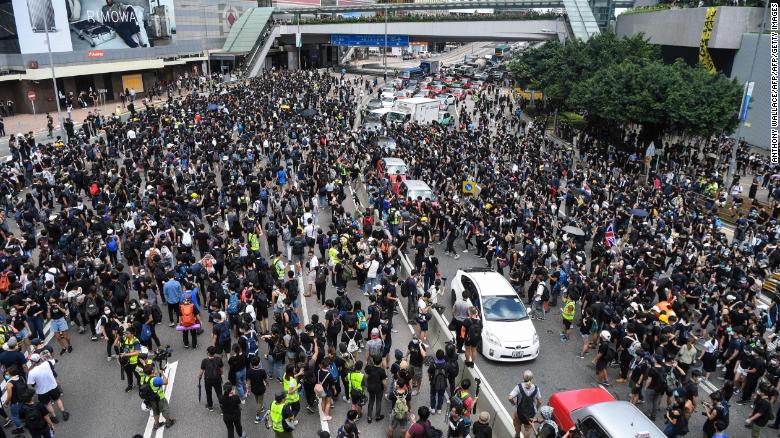 Protesters occupy a main road outside the government headquarters in Hong Kong on June 21, 2019.

She did not respond to demands to completely withdraw, rather than pause, the bill, however. Nor did she resign or call for an investigation into alleged police brutality during violent protests on June 12, other key protest demands.

Student and pro-democracy groups had given Lam until 5 p.m. Thursday to respond to those demands, saying they would stage further protests Friday if she did not. Those protests began with a peaceful sit in outside the legislature and central government offices, which have been closed to all business, before demonstrators escalated by seizing Harcourt Road.

Police presence is considerably smaller Friday than it was last week, when they used tear gas and rubber bullets to clear tens of thousands of protests from Harcourt and surrounding streets.

Multiple other events are planned Friday, including a memorial for a protester who fell to his death from the Pacific Place mall last week, and demonstrations by parent groups, as Hong Kong authorities brace for a summer of disruption and discontent over the failed bill.

Do you have a coronavirus story? You can email us on: news@alphamedia.co.zw

Up close and personal with King 98

newsday July 10, 2020
THE Zanu PF government has brought untold misery on the people. Whether it is the military doing this behind the scenes so ...

AMHVoices: ED must get off his high horse

newsday July 9, 2020
THE situation in which Zimbabwe finds itself is very bad to say the least, as this reminds the people of the 2006 ...
We use cookies to ensure that we give you the best experience on our website. If you continue to use this site we will assume that you are happy with it. Privacy policyOk