Labour leader Jeremy Corbyn said on Friday that the negotiations have “gone as far as they can go” and that the two sides had been unable to bridge “important policy gaps between us.”

The talks, which have lasted nearly two months, were convened in an attempt to agree on a Brexit plan that could stand a chance of being approved by Britain’s fractured Parliament. But the prospect of agreement faded as lawmakers on both sides grew irritated with the process.

May was forced to indicate that she will stand down soon as Conservative Party leader, making it even less likely that Labour would be motivated to help her.

It’s now less clear than ever how the UK will leave the European Union, three years after Britons gave a narrow mandate for the split in a bitterly fought referendum. The latest deadline agreed with the EU is October 31, but there currently seems little prospect of any plan winning a majority in the House of Commons.

In a letter to May, Corbyn blamed the collapse of the talks on the fragility of May’s government and warned that even if a deal was reached, her successor could simply tear it up. “The increasing weakness and instability of your government means there cannot be confidence in securing whatever might be agreed between us,” he wrote.

May, in turn, pointed the finger at Labour’s own divisions over Brexit. “We have not been able to overcome the fact that there is not a common position in Labour about whether they want to deliver Brexit or hold a second referendum which could reverse it,” she said at a campaign event ahead of next week’s European elections. 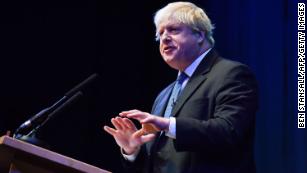 Corbyn’s longstanding reluctance to demand a new referendum as a condition for supporting a Brexit deal has angered the pro-Remain faction of his party. May’s attempt to reach across the aisle, meanwhile, had infuriated the hardline pro-Brexit group in her bloc.

The collapse of negotiations ensures that Britain’s political crisis over Brexit drags on. May plans to put her original Withdrawal Agreement to lawmakers for a fourth time in early June, and votes could also be held on a set of alternative options. MPs have already rejeced the deal three times and the chances of it passing at the fourth attempt look as slim as ever.

It was confirmed on Thursday that May would outline a timetable for her departure after the June vote is held, regardless of the outcome. That means the Conservative Party would hold an election to choose a new leader — and, by default, a new Prime Minister — this summer, likely bringing with it a new round of political uncertainty.

‘I sing about weed, but I don’t smoke’

newsday January 24, 2020
THERE is always a scapegoat for failure with this government. Failure is not in their vocabulary. The so-called youth have been absorbed ...

ED hiding behind a finger

newsday January 23, 2020
PRESIDENT Emmerson Mnangagwa’s government never seizes to amaze, albeit in a negative way. After failing to control the MaShurugwis who it encouraged ...