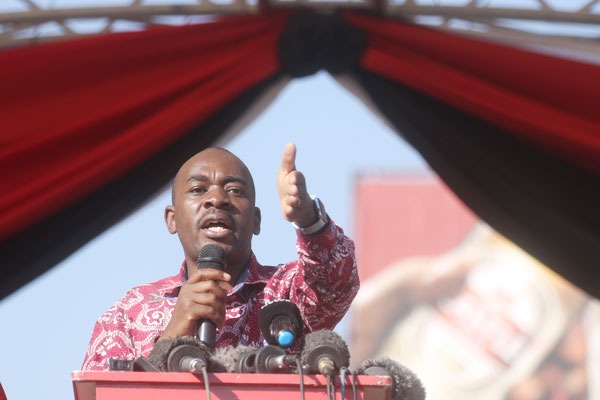 Hordes of MDC supporters ignored thousands of anti-Nelson Chamisa flyers strewn all over Chiredzi to attend a rally addressed by the youthfull opposition leader on Sunday.

Hordes of MDC supporters ignored thousands of anti-Nelson Chamisa flyers strewn all over Chiredzi to attend a rally addressed by the youthfull opposition leader on Sunday.

The fliers which read: “Khupe in, Chamisa out. Rally cancelled” littered the streets of Tshovani township, Hippo Valley and Triangle on Saturday; a day before the rally purporting that the event had been cancelled following a High Court ruling which declared Chamisa an illegitimate leader and ordered that the MDC goes for an extraordinary congress.

“We might have our differences with Thokozani, but I would bet my bottom dollar she is not the one responsible for this. To her these shenanigans are not worth the candle. Please leave her out of this. This was the work of the Central Intelligence Organisation. They are the only ones who can move heaven and earth to derail the train of the MDC movement,” he said.

“I was in MDC since its formation and I know Khupe. I know her strengths and her weaknesses so I am sure she is not responsible for this. Zanu PF and their security agents are fighting us from different corners, but this time it showed how dumb they are because even a kid in kindergarten could tell this was the work of the CIO.

“The stadium was full to the rafters with over 20 000 supporters in attendance. That shows no one took those fliers seriously. I am surprised that in this era there are still some people who are being paid to fight the people’s party.”

Khaliphani Pugheni the MDC-T national ICT developer, who spoke as acting party spokesperson said he was happy that Chibaya refused to use cheap shots to achieve political goals.

“Chibaya knows Khupe very well that she is a democratic person who would not go extra-democratic to achieve a democratic goal; if you follow what I mean. Khupe even said almost the same thing about Advocate Nelson Chamisa after the High Court ruling when she said he should not be abused or harassed in any way. These things have been happening for a long time where papers are thrown around denouncing Chamisa or Khupe. What the government should do is to track the people who are doing that and arrest them,” he said.

“These allegations are total hogwash. We have a lot to do than to meddle in MDC politics. We have the economy to attend to, not issues to do with MDC or their congress. After all the person who sued them was from MDC so where does Zanu PF come in?” Khaya Moyo asked.

Khupe was kicked out of the MDC last year, together with former national organising secretary Abdenico Bhebhe and former spokesperson Obert Gutu, after they refused to approve the party’s decision to let Chamisa take the reins on an interim basis following the death of party founding leader Morgan Tsvangirai.