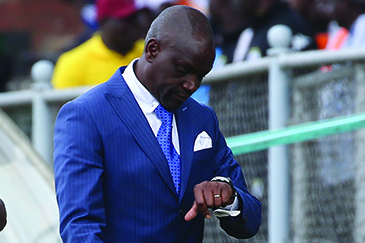 JUST when one thought things couldn’t get any worse for Dynamos, the Harare giants were plunged into further crisis yesterday when they were beaten by Harare City at Rufaro Stadium, a defeat that left them just two points from the relegation zone.

JUST when one thought things couldn’t get any worse for Dynamos, the Harare giants were plunged into further crisis yesterday when they were beaten by Harare City at Rufaro Stadium, a defeat that left them just two points from the relegation zone.

Unlike in the midweek draw against Chapungu when Lloyd Mutasa’s men were just lifeless, they put up a good fight in this one, with a spirited second half performance that merited a goal at the least.

But they were made to pay a heavy price for a slow and sluggish start against their city rivals, when poor defending allowed Ishmael Wadi to cut through the defence to fire past the rather impressive goalkeeper, Simbarashe Chinani, eight minutes into the match.

This was the second time the hard-running Wadi had easily breached the Dynamos defence, with his initial attempt after running clear three minutes earlier, easily gathered by the goalkeeper.

Dynamos started the match slowly, unsurprisingly so for a team that is low on confidence having not won a match in their last three games, as they allowed City to boss the midfield battles, with Moses Muchenje and young Tellmore Pio impressive.

Wadi was proving a handful for the Dynamos defence, but his stay in the field of play lasted just 16 minutes as he was substituted due to an injury he picked while shooting to score the only goal of the match.

The former Bulawayo City man, who scored for his team last week away in Triangle, was replaced by William Manondo in a change that appeared to impact on their rhythm as Dynamos threatened for some moments with Denver Mukamba coming close on 20 minutes from a cross by Quality Kangadze.

At the end of the first half, Muchenje nearly doubled the lead with a spectacular long range effort.

Still Dynamos refused to be cowed into submission and on 45 minutes, Mukamba threaded a pass to Kangadze, who beat keeper Ryan Harrison to the ball, but his effort was cleared off the goal line by Munyaradzi Nyenye.

In the second half, Dynamos overshadowed their opponents as they took control and bombarded the goal area with an assortment of shots as they sought to equalise.

The introduction of Brett Amidu, Kudzanai Dhemere and Tawanda Macheke brought spark into their attack. They should have equalised when Harrison fumbled a Blessing Moyo freekick, but the giant goalkeeper made amends when he blocked Cleopas Kapupurika’s shot from the rebound.

Mukamba then hit the underside of the cross bar from another freekick as Dynamos continued to search for an equaliser that never was.

Mutasa was disappointed by the result but happy with the overall performance of his team.

“We started slowly and Harare City were in it from the first whistle and we conceded an early goal which I thought was due to slack marking.

“In the second half, we tried to take the game to them and we got a few chances, but we couldn’t score. But you look at the result and the performance, you see the commitment and zeal is there from the boys and we live on hope. It’s obviously worrisome to play three games without scoring a goal, but the creativity is there and entries into the box. The problem is just getting the ball behind the nets,” Mutasa said.

Harare City won the reverse fixture 2-1, and while the scoreline suggests a closely fought contest, in actual fact, the Mark Harrison-coached side had it easily on the day. But in this one, they were made to work hard and long for the three points.

“In the first 25-30 minutes, we were the best team. We got the goal in that period and I thought we were in control. Obviously, after the goal, I mean the problem is you have got a team today that has got it back against the wall. They are in desperate need of points. We knew they were going to give us a hard time, we knew they were not going to let go today. They were going to chase everything. We had to be prepared for that battle.

“Fortunately, we got that goal at the right time; it gave us something to hold on to and they pressed hard, you know. I have to be honest, I don’t think this season they have been too many that dominated us like that, pressed us down like that,” coach Harrison said.