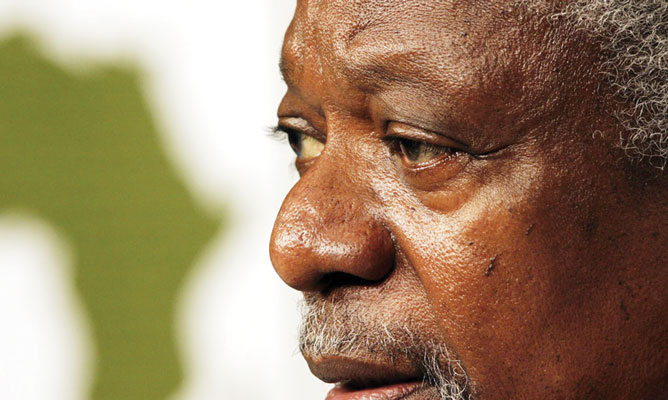 The Elders Council led by former United Nations secretary-general, Kofi Annan, wrapped up their three-day working visit to Harare on Saturday and flew back without meeting President Robert Mugabe.

The Elders Council led by former United Nations secretary-general, Kofi Annan, wrapped up their three-day working visit to Harare on Saturday and flew back without meeting President Robert Mugabe.

Annan, who was flanked by former Irish President Mary Robinson, told journalists on Saturday that their programme had been too hectic.

“This time we are here for a very short time. We have a hectic programme and, honestly, we have not sought to speak with him (Mugabe.”

In 2008, Mugabe angrily declined Annan, former US President Jimmy Carter and former South African First Lady Graca Machel entry into the country as they sought to help find a solution to Zimbabwe’s political crisis in the aftermath of a bloody run-off election from which the late MDC-T leader, Morgan Tsvangirai, had pulled out. The late Tsvangirai had cited State-sponsored violence that had left thousands displaced and hundreds killed for non participation.

“In our discussions with political leaders and civil society, we did urge them to watch the language they use. We all know that language can inflame, it can excite but it can also harm. We can discuss without insulting each other.

“We should also try in the last 10 days to encourage the political leaders to talk about their programmes. Let’s move away from personalities,” Annan said.

He also encouraged Zec to continue improving the electoral field by addressing some of the concerns that have been raised by the opposition on alleged lack of transparency on voters roll and the ballot paper.

“In the last few days some positive progress has been made. There is ongoing discussion and hopefully, there is going to be give and take to try and resolve some of the issues before the elections.

“It is important that ZEC is transparent, independent and open to all the political parties,” he said.