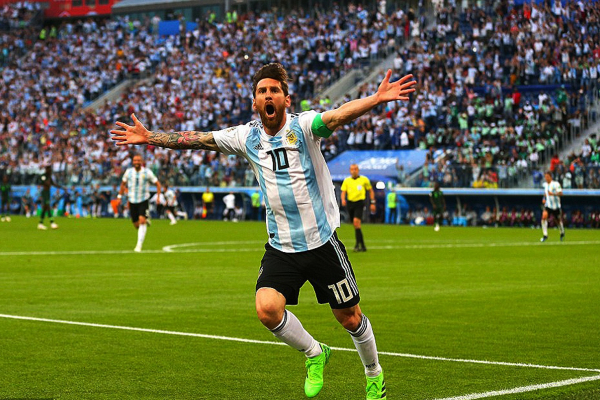 Marcos Rojo's late winner put Argentina through to the round of 16 at the World Cup with a 2-1 victory against Nigeria last night.

Rostov — Marcos Rojo’s late winner put Argentina through to the round of 16 at the World Cup with a 2-1 victory against Nigeria last night. ESPNsoccernet

The South Americans came into the match knowing they needed three points to escape Group D. And their talisman Lionel Messi (pictured) had them in front just before the 15-minute mark when he settled an Ever Banega pass over the top of the Nigeria defence and beat Francis Uzoho to put Argentina up 1-0.

The goal snapped a 660-minute scoreless drought at the World Cup for Messi, who last scored against Nigeria in the group stage of the 2014 edition in Brazil. Uzoho came up with two great saves either side of the half-hour, keeping out Gonzalo Higuain from close range and then getting a fingertip on a Messi free kick from just outside the penalty area that would have found the back of the net.

Nigeria were level at 1-1 through a penalty kick soon after the restart when John Obi Mikel converted his attempt from the spot after Javier Mascherano was whistled for a foul on Leon Balogun following a corner kick.

Argentina were fortunate not to concede another penalty just before 80 minutes when a headed clearance by Rojo hit off his arm, forcing the referee into a video review after which he did not give the spot kick.

Minutes later, Gonzalo Higuain missed a golden chance to put Argentina in front, but he skied his first-time effort from a Rojo cross well over the bar.

And it was Rojo that would score the winner for Argentina, smashing in a first-time volley from a Gabriel Mercado cross to give his team the lead and put them through to the round of 16 for a match-up with Group C winners France.