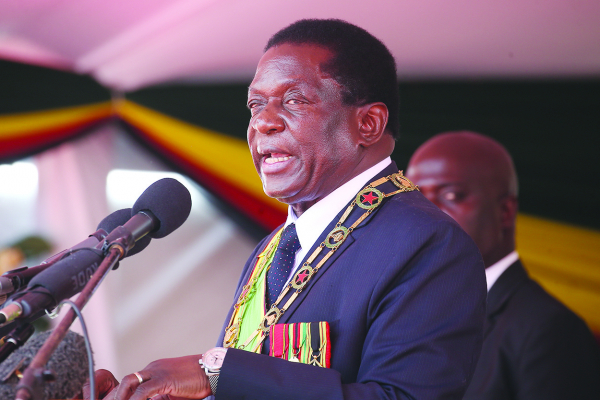 PRESIDENT Emmerson Mnangagwa has said he was confident of being the country’s President in 2030, hence, the vision for the country’s economy by that year was not a coincidence.

PRESIDENT Emmerson Mnangagwa has said he was confident of being the country’s President in 2030, hence, the vision for the country’s economy by that year was not a coincidence.

Addressing captains of industry at the Buy Zimbabwe conference in Gweru on Thursday, Mnangagwa said his administration was working on ways to resuscitate the economy, saying he had broader plans to turn Zimbabwe into a cashless economy.

“I would want to commend the Buy Zimbabwe team which has continued to work closely with both private and public sectors to drive the buy local message and encourage the purchase of local products and services so that local businesses can thrive, thereby, stimulating economic growth and creating decent jobs for us to be a middle income country by 2030.”

Mnangagwa said he had a vision to turn the economy into a cashless economy and urged Zimbabweans to embrace plastic money since this was the global trend.

“I know people are struggling to get cash, but our vision is to turn the economy into a cashless economy. Developed countries no longer use cash and we should move towards achieving that,” he said.

Mnangagwa appealed to people to vote for him so that he could achieve his vision for the country.

He said the government was in the process of crafting a template outlining the target economic growth for each province and how it could contribute towards national economic development.

The Zanu PF leader said provincial ministers would be appointed on their contribution to the country gross domestic product.

“We are crafting a template for all the 10 provinces so that we have competition among these provinces in terms of economic growth and the size of [gross domestic product] GDP,” he said.

“There is not a single province in this country that has peculiar advantages endowed to them and we need the leaders of those provinces to ensure they utilise the resources found in their provinces by competing with other provinces. This is now for provincial ministers because their security shall depend on the growth of GDP in their provinces.”

He said he was aware people were worried about cash, but urged the electorate to vote for him.