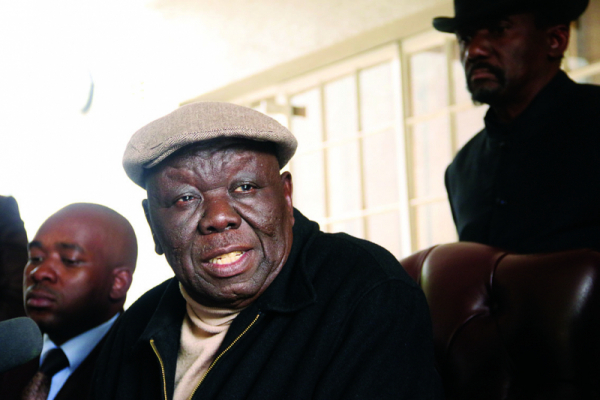 Two characters exited the political stage almost simultaneously; one through a forced retirement and the other through death. They were both larger than life: one by what he achieved in life, the other by what he sought to achieve. They both left shoes that have to be filled, as it turns out, by mere mortals. After nearly four decades in power what kind of shoes did Robert Mugabe leave behind? What about Morgan Tsvangirai? Does anyone have to attempt to fill their shoes, or should pretenders to their thrones find their own shoemakers?

Two characters exited the political stage almost simultaneously; one through a forced retirement and the other through death. They were both larger than life: one by what he achieved in life, the other by what he sought to achieve. They both left shoes that have to be filled, as it turns out, by mere mortals. After nearly four decades in power what kind of shoes did Robert Mugabe leave behind? What about Morgan Tsvangirai? Does anyone have to attempt to fill their shoes, or should pretenders to their thrones find their own shoemakers?

Mugabe, who was born in 1924, was catapulted into the national discourse in the late 1950s when he returned from independent Ghana where had worked as a schoolteacher. His rise was a combination of luck and charisma.

He returned to the then Rhodesia and plunged into the nationalist struggle, joining the National Democratic Party is 1960. Ghana had gained independence from Britain in 1957, the first African country to do so. The decolonisation sentiment was gathering momentum on the continent, what with Harold Macmillan’s “winds of change” speech to the South African parliament on February 3 1960 in Cape Town?

The speech was significant in that it showed that the then British government had become reluctant to continue to stand in the way of African countries’ drive for independence. After that speech Africa decolonised quickly.

But for Rhodesia the process was in for the long haul.

Because of his charisma mainly manifested in his erudition and turn of phrase Mugabe was quickly thrown into the leadership of a quickly radicalising struggle. In 1964 he was thrown into detention with other top leaders of the struggle where he would spend the next 11 years.

How he became the mascot of the liberation struggle is open to dispute. Conspiracy theories abound to explain this but if truth be told Mugabe played a crucial role in the execution of the armed struggle and in the path towards the attainment of independence.

He then led the country uninterrupted for nearly 38 years.

During his time Mugabe rose from simply an illustrious freedom fighter; he became the African Hercules: a hero and a god.

To do this he stole all the people’s civil liberties and ruled with an iron hand that left Zimbabwe a scarred nation. Living standards fell back to post-WWII levels. Millions of people fled the country to seek solace elsewhere.

His departure from the scene was greeted with jubilation, not only in Zimbabwe but also around the world.

Tsvangirai was born in 1952. He rose from being a trade unionist to become Zimbabwe’s foremost opposition leader. His rise to political stardom coincided with, if it was not a consequence of, Mugabe’s metamorphosis into the caricature of an ogre.

He built a formidable force called the Movement for Democratic Change, which just a few months into existence shook Mugabe’s establishment to its roots.

Formed in September 1999 as a conglomeration of trade unions, students and civil society organisations the MDC brewed up the greatest upset in Zimbabwe’s electoral history by defeating a referendum that Mugabe and the Zanu PF party had set out to win at any cost. It was the first electoral defeat Zanu PF had tasted.

Tsvangirai’s star rose dramatically after that victory and he became the face of Zimbabwe’s opposition politics. He also became an iconic figure in the eyes of the world, as he was seen as the only hope to end the Mugabe dictatorship that had turned the country into a pariah state.

As it turned out, Tsvangirai never achieved that feat. Despite winning the Presidential election in 2008, he never got to State House. He got a consolation prize though: he lived to see Mugabe removed from office, although through a military intervention.

Tsvangirai’s death due to colon cancer on Valentine’s Day this year elicited a sense of bathos universally.

Mugabe knew little about statecraft, except in the Machiavellian sense where the running of the state is all through contrivance, cunning and duplicity.

His legacy says it loud and clear: Zimbabwe’s is the most divided country in the world for a small country of less than 15 million people. When he was forced out he left his own political party in tatters, intraparty fighting had reached a crescendo much to the detriment of the country. That fighting continues without an end in sight.

The country’s fortunes dipped and Zimbabwe is now counted among the poorest nations of the world.

His opposite number, Tsvangirai didn’t fare any better. In the 17 years he led the MDC he imitated Mugabe’s leadership style so that instead of becoming Mugabe’s nemesis, he became another pea in the same pod.

Tsvangirai left behind a divided MDC, and as Zimbabweans are wont to say, “He was buried with his thing,” meaning the MDC won’t thrive long after him.

Zimbabweans are revelling in the prospect of the first plebiscite in nearly 20 years without the toxic names of Mugabe and Tsvangirai.

But the greatest conundrum of the time: what will become of the country in their shadow?

The two have respectively been replaced by Emmerson Mnangagwa (75) and Nelson Chamisa (40), who are trying to fill their bosses’ shoes. For Chamisa, it’s a double whammy: besides Tsvangirai’s, he also wishes to fill Mugabe’s boots.

Tsvangirai’s shoes are those of a leader who tried to move mountains, but failed spectacularly due the enormity of the task before him and also due to his flawed personality that saw the party splintering several times. Chamisa, so far has failed to unite the party, instead leading it into further fission due to the way he took over the reins and the way he is reigning it.

In the few months he has been at the helm he has not shown the vision that should unite the party and bring back its glory days. What the world has seen is the possibility of further splintering as manifested in the way he has handled emerging problems, particularly the Thokozani Khupe issue and the Jessie Majome debacle in Harare West. His responses to these problems have defined him: impulsive, ill-advised and whimsical.

Mugabe’s shoes are grotesque. Zimbabwe has been broken into shards over the whole period of his rule. It can be argued Zimbabwe is among the most divided nations on the continent.

Any leader who wishes to move Zimbabwe forward should be a bridge builder. It should be someone with a vision to confront head on the problems that constitute Mugabe’s legacy.

Ethnic-based suspicions thrive 20 years after the end of Gukurahundi, a period between 1983-7 when Mugabe sent into southwestern Zimbabwe a crack North-Korea-trained military brigade to suppress an insurgency by a disgruntled unit of former freedom fighters.

The number of people killed during that time is a matter of conjecture. In his book The Story of My Life former vice-president Joshua Nkomo and the anointed leader of region suggested that 20,000 people perished. Mugabe disputes the figure and blames that conflagration on the victims themselves.

Just how deep-rooted is the fallout between the southwestern region and the rest of the country? Or, to put it more bluntly, the Ndebele and the Shona?

Whichever way it is looked at the Gukurahundi will remain a thorn in the flesh for the rulers of this country for a long time to come.

The situation is compounded by that the people generally referred to as the Shona are hardly a homogeneous lot. Intra-Shona rivalry is legendary dating back to the liberation struggle. Mugabe didn’t seek to eradicate it, but instead encouraged it as a device to keep his hold on power.

Racial divisions also exist in Zimbabwe. What exactly is the thinking of the white community and other racial minorities in Zimbabwe like, with regards their citizenship of the country; how far they are willing to go to reconstruct a non-racial society; and weather they are important or relevant in post-Mugabe era. Are they going to remain at the periphery of Zimbabwean politics as they have done in the past two decades?

But racial divisions are not the greatest threat to peace and stability in the post-Mugabe era. Rather, it will be the political divisions that have polarised the whole Zimbabwean community.

The political divisions reached a high point defined by the extreme violence at the turn of the millennium when Tsvangirai launched MDC. Mugabe managed to crush the opposition movement through all means necessary including violence and manipulation of the electoral process.

Does Mnangagwa have to emulate that or define a new path, his own path? This is what he has sought to do in the six months he has been in power. But the world keenly awaits his behaviour post the coming polls. From now they have chosen to give him the benefit of the doubt. His dispensation has met loads of internationals goodwill. Chamisa has a huge task: to ensure opposition politics remain an issue in the post-Mugabe era? It seems opposition political parties will never effectively challenge Zanu-PF hegemony in a way that doesn’t divide the country further if a visionary doesn’t emerge. The evidence is there for all to see; political parties splinter at the drop a of pin and new formations emerge almost immediately.

Whereas Tsvangirai fared relatively well in keeping the fires of opposition politics burning, it will take a staid bridge builder to reconstitute all the forces that would keep government in check as is necessary for any democracy.

Chamisa is far from convincing in that regard.

Zimbabweans are faced with a stark choice between Mnangagwa’s stoicism, newfound pragmatism and his solid grasp of statecraft and Chamisa’s boundless energy borne of nothing else but his youthfulness, his charisma and sex appeal.

Both have fanatics who will blindly vote for them, but their different approaches to electioneering are beginning to separate the men from the boys. One preaches growth based on informed, well-grounded policies while the other’s message is fanciful and utopian.

Most importantly, Zimbabweans will have to decide, who between the two has a real grasp of how economics work. Zimbabwe has so much potential considering its human capital, mineral resources, tourism and its place in the region and on the continent. All this potential had been brought to waste in Mugabe’s self politics of hate. Zimbabwe will need someone who is well-grounded to exploit its potential to the benefit of the country in the backdrop of where the country finds itself on the continuum of nations.

It’s right there at the bottom of the pile.

Mnangagwa has made a good start by courting and harnessing international goodwill as the foundation of an economic turnaround for the country. But again all we depend on his behaviour if, or when, he wins the July elections. There will be a point where delivery will be demanded; and that will be very soon.

Chamisa’s immediate task is to inspire confidence in the electorate that he is mature and can handle the nitty-gritty of statecraft. His appeal should spread beyond the fanatics to the whole body politic.

Nevanji Madanhire is a veteran journalist and former NewsDay editor. He writes in his personal capacity

By Charles Dhewa 5h ago
Business vs financial literacy

By Newsday 15h ago
How Do You Use Your Social Media For Growing Traffic & Sales?