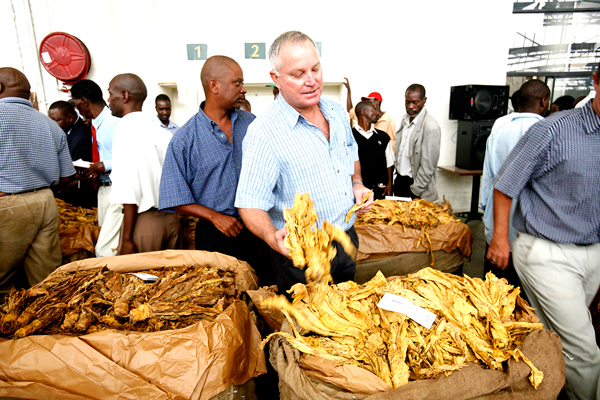 TOBACCO Industry Marketing Board (TIMB) has suspended Agritrade Leaf tobacco from buying tobacco in Rusape amid revelations that the company was buying the golden leaf from non-contracted farmers, in contravention of laid down procedures.

TOBACCO Industry Marketing Board (TIMB) has suspended Agritrade Leaf tobacco from buying tobacco in Rusape amid revelations that the company was buying the golden leaf from non-contracted farmers, in contravention of laid down procedures.

NewsDay understands that the suspension of operations of the company was done following a TIMB board meeting held last Thursday.

According to sources, the board’s decision to halt the contract tobacco company’s operations in Rusape was done after it emerged that it was buying the crop from non-contracted farmers.

TIMB communicated the suspension which became effective last Friday through a letter gleaned by this paper copied to various tobacco stakeholders among them associations and merchants.

“Please be advised that the TIMB board at its meeting of yesterday has directed the operation of the Agritrade Contract Sales Floor in Rusape be suspended immediately,” read the letter signed by TIMB chief executive officer Andrew Matibiri.

Zimbabwe Tobacco Association chief executive officer, Rodney Ambrose confirmed receiving a communication from the regulator that it had suspended Agritrade operations in Rusape.

“Yes, we received a letter from the regulator that Agritrade’s Rusape operations have been suspended but it did not indicate as to on what grounds were it terminated,” he said.

Zimbabwe Commercial Farmers Union president Wonder Chabikwa said he was aware of the suspension of the company from buying tobacco in Rusape.

“We are aware of this, TIMB informed us but they did not give us details as to why they stopped the operations. Normally they should give the reasons. If they don’t tell us, the onus will be on us to ask them,” Chabikwa said.

TIMB has sanctioned the opening of two tobacco buying floors by Mashonaland Tobacco company and Agritrade Leaf Tobacco in Rusape this season as part of the decentralisation process, a move which farmers in Manicaland province have welcomed as it cut transport costs.

“The decentralisation was done for convenience to the farmers because it could cut transport costs to the farmer. We are anxious to know why it was suspended. We can’t say it was a bad decision because maybe they looked at the irregularities which were happening there,” Chabikwa said.

Efforts to get a comment from Agritrade’s managing director Cephas Rukweza were fruitless as his phone went unanswered and emails sent to him were not responded to at the time of going to print.

Agritrade is also in the eye of a storm after it allegedly deducted insurance premiums from farmers without prior contractual agreements.

Our sister paper, The Standard reported on Sunday that tobacco farmers professed ignorance of having entered into any insurance agreement with Agritrade and Champions Insurance, but were surprised to see insurance deductions when they sold their crop.