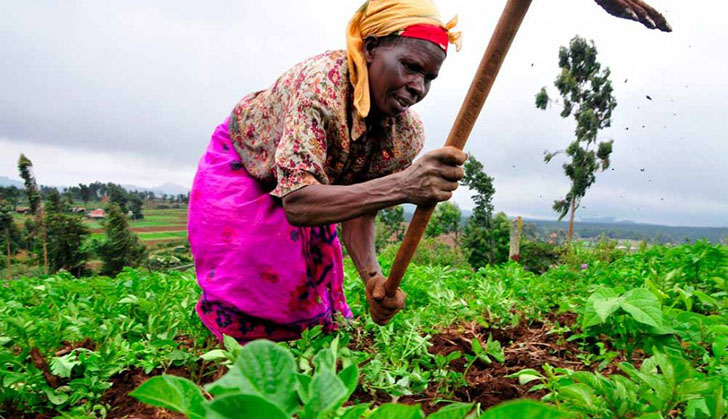 Laiza Mukute’s 14-hectare plot is a pale shadow of what it was 10 years ago.

MAZOWE — Laiza Mukute’s 14-hectare plot is a pale shadow of what it was 10 years ago.

The Mukute family — 43-year-old Laiza, her husband, and three sons — obtained the plot in 2001 under a land reform programme that saw thousands of commercial white farmers evicted and their land allocated to black Zimbabweans.

Laiza’s husband was killed by lightning in 2007. Her sons have all moved to the capital to eke out a living as street vendors, leaving their mother only with their younger, teenage sister.

Like many young Zimbabweans, they see no future for themselves in the troubled sector.

Agriculture in Zimbabwe has long suffered from meagre State investment, poor training, and limited access to farming equipment and credit — not to mention the effects of climate change in a region that has repeatedly been struck by devastating droughts and floods.

“My sons won’t hear anything about farming. They would rather be in the city, even though life is also tough for them there,” Mukute said, some 60km northeast of Harare.

This youth disillusionment is a phenomenon that extends well beyond the borders of Zimbabwe, according to Peter Wobst, who works on rural poverty reduction at the United Nation’s Food and Agriculture Organisation (FAO).

This is despite the fact that the almost 200 million people in Africa aged between 15 and 24, as FAO puts it, represent “a large potential reservoir for the growth of the agriculture sector”.

Mukute is barely making ends meet. She can’t afford to replace her dilapidated ox-drawn cart and has sold off most of her livestock.

Only her 15-year-old daughter, Elizabeth, helps her in the fields. “Who knows, she may also join her brothers one day and leave me too struggle on my own,” she said.

These are well-founded fears.

“I can’t remain stuck here farming because it comes with hard labour,” Elizabeth said. “If I pass my O-level [exams] next year, my mother and my brothers will have to find money for me to go for A-levels and, after that, university. I want to be a lawyer and I will employ someone to come and help my mother with work on the plot.”

Whereas, the larger Mukute family used to grow maize, groundnuts, and tobacco on the full 10 hectares, now only two hectares are under cultivation.

Many families in Mazowe and rural areas across Zimbabwe have seen a similar exodus of younger members to cities, gold and diamond mining areas, and other countries.

Wonder Chabikwa, head of the Zimbabwe Commercial Farmers’ Union, said the future of farming and food security in the country will depend on the commitment of young people to working the resettled land.

“Most of the youth seem not to have a conviction for farming, and the majority of those that will remain to till the land will do so because they have limited options,” he said.

This sentiment is echoed on the website of the Zimbabwe Farmers’ Union, a separate association, which recognises that “the future of agriculture lies in the hands of the youths, and, therefore, there is [an] urgent need to unleash their potential and energy in that direction”.

To this end, for the past five years, ZFU has organised a Youth Agripreneurship Summit, which brings hundreds of young farmers together to acquire leadership skills, network with key players in the sector, and learn about new technology.

One school of thought is that there might be more interest from young people if they could be encouraged to drive through commercialisation in the sector that would help address the low productivity issues.

But Chabikwa warned of the dangers of placing too much emphasis on the types of farming that generate the greatest profits, such as tobacco, even if that crop has dramatically improved the living standards of many resettled farmers.

“Inevitably, the youth would always be enticed by farming that brings money through cash, but this is at the expense of food crops like maize. If the youth would rush into tobacco farming and horticulture, food security suffers,” he said.

A survey of the aspirations of school children in two of Zimbabwe’s provinces conducted in March 2017 found that, while some respondents mentioned agriculture, they “didn’t emphasise just any old farming, but they had a clear focus on intensive irrigated agriculture, notably horticulture, but also tobacco” — both “seen as a route to accumulation (of wealth) and future prosperity”.

Cited obstacles to realising these aspirations included lack of farming skills and access to land.

In Mukute’s neighbourhood, the latter is a common concern.

Johnson Hozheri, 34, farms on 1,5 hectares given to him by his father when he married and couldn’t find another farm to settle on.

“My father gave the four of us (three brothers and a sister) plots on this farm on which we were resettled as a family 18 years ago. The plots are too small for meaningful farming, but do we have a choice? We are already congested,” he said.

To supplement their income, the brothers pan for gold along the Mazowe River during the dry season.

They also cross the border to South Africa, Botswana, and Zambia to buy various goods for resale among the rural farmers or in nearby towns.

“We always come back home, because life is tough in the towns or in other countries,” Hozheri said. “Young people from smaller families have been luckier because there is more to share, but disputes over who is entitled to the land in the event of the death of the parents are common in this community.

“There are several cases where the farms ended up derelict because of the disputes.”

To redress such problems, independent Member of Parliament Temba Mliswa, also a farmer, is urging the government to speed up a promised audit to identify unused resettled land and make it available for young farmers squeezed into plots allocated to their parents.

He said the government must also prioritise the training of young people in agriculture.

A recent report by the Parliamentary Committee on Lands and Agriculture identified major shortcomings among the country’s tertiary educational institutions, exacerbated by shoestring budgets and obsolete or inadequate training materials and equipment.