Will violence be with us forever? 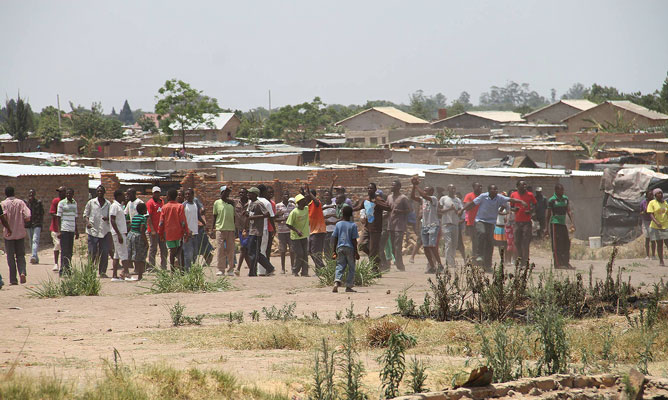 On August 6, 1945 the Americans dropped the first nuclear bomb on Hiroshima to bring the war against Japan to an end. The human catastrophe was so horrendous, it was never done again. The mad strategic concept of MAD (= Mutually Assured Destruction) worked. If we are still alive 70 years later, we owe it to, among other things, MAD, that is to the terror inflicted on humanity by the mushroom of a nuclear cloud hovering over the mass grave called Hiroshima.

On August 6, 1945 the Americans dropped the first nuclear bomb on Hiroshima to bring the war against Japan to an end. The human catastrophe was so horrendous, it was never done again. The mad strategic concept of MAD (= Mutually Assured Destruction) worked. If we are still alive 70 years later, we owe it to, among other things, MAD, that is to the terror inflicted on humanity by the mushroom of a nuclear cloud hovering over the mass grave called Hiroshima.

A nuclear power knows that a nuclear strike will result in an immediate counter-strike by the enemy. It could lead to the annihilation of all humanity. Nobody has yet run this risk. But the potential is there, as long as we maintain a nuclear arsenal ready to be launched.

MAD is based on a balance of fear and terror. Once this fear is reduced on one side, the balance may tip over, and one of the opponents may risk a nuclear conflict.

Attempts have been made time and again on United Nations level to stop the proliferation of nuclear arms and eventually do away with this risk of instant genocide altogether. But such a ban will only achieve its objective if all nuclear powers are prepared to scrap their atom bombs and missiles. Unfortunately some nuclear powers are not prepared to do that. They feel more secure under the umbrella of MAD, being able to threaten their rivals, with the risk of total annihilation of all parties involved.

The relationship between armed nuclear powers is most precarious and could in an unstable situation trigger off an explosion and destruction never seen before and probably never seen again since there won’t be anything left to see.

Nuclear mutual destruction is only the most extreme form of violence. But the mechanism works, not only for military violence, but wherever violent forces confront each other, even in a domestic marital situation. A wife may refrain from assaulting her abusive husband if the retaliation is worse than any previous abuse she suffered.

Why do military powers risk armed conflicts and outright war? Only when they can count on their eventual victory which of course is very often a delusion. Few armed conflicts end 100 % victorious for one side or the other. Most wars inflict untold damage on both winners and losers.

Essentially, military conflicts end in failure, destruction and devastation. Even the victorious side suffers massive damage. In World War II there was the complete destruction of Dresden, but also the bombing of London and Coventry.

Many farmers in this country decided to resist by all means the coming onslaught by armed guerillas in their struggle for Independence. They did not foresee what that would cost them in terms of material damage and loss of human lives. Old men, no longer fit to fight, send the young men to do the dying, on both sides. This is nothing new.

Looking into history, the outcome is so often foreseeable : talking at a round-table, negotiating a compromise, ‘give and take’ would have prevented the wholesale slaughter of the youth of the country. But the illusion of complete military superiority would not allow this.

Why all the blood spilled? Is it necessary? Do people never learn? We still have a long way to go to learn how precious human life is and not to be wasted. I write as a war orphan myself.

At the end the erstwhile enemies will come to an understanding which they could have achieved right at the beginning, even without guns, blood spilled, torture and loss of life. Why can’t they start by talking with great patience and perseverance, why so much death and dying first? Questions few people have ever asked, but have to ask today more than ever.

Even Christians who are obliged by their gospel message to shun wars of aggression (“Whoever takes up a sword, will die by the sword”), and may only take up arms in the defense of family and country (called a “just war”), end up in cruel and inhuman violent clashes beyond their control.

Once you have an army, the temptation is that you also want to make use of it, especially heavy armament for warfare of conquest. And if there is no external enemy, leaders may well use such forces internally trying to control political dissidents. Just watch international news services.

The production of more and more sophisticated weapons keeps the arms merchants busy and armed conflicts going. When will we see that those millions and billions spent on destruction are needed for education and health, for fighting killers diseases, vocational training and work places?

But what is finally at the root of all wars, violence and “Mutually Assured Destruction” (MAD)?

The human heart is not at peace , it is full of bitterness and resentment, hatred and malice, even if we do not know it ourselves. Non-proliferation treaties and disarmament, necessary as they are, will not last unless the evil in our hearts is overcome.

Compassion and respect for human life have to be planted even in children if evil and malice are not to sink roots in their hearts. It is a spiritual catastrophe that the young ones are fed a diet of violence and crime in the entertainment media. Are not wanton killings of innocent children by their peers the result?

Xenophobia must give way to hospitality, persecution of strangers and migrants must not be tolerated as part of the culture now developing globally.

Violence will not be overcome by more violence. An evil heart needs to be healed by sheer goodness and forgiveness. Then “mutual deterrence” will no longer be needed. Violence, with us since the beginning, will not terrify us to the very end.