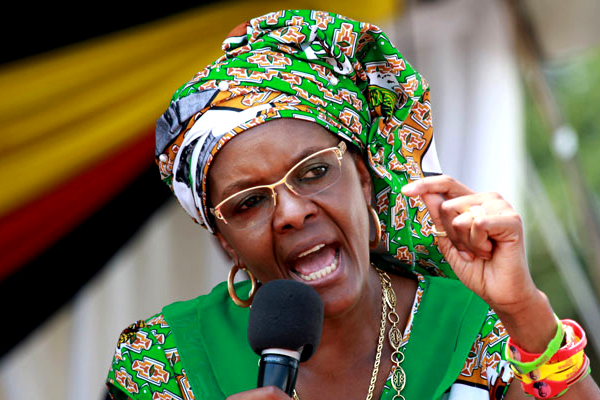 The ZHRC wants to probe Grace for forcibly evicting over 200 families, from Manzou Farm in Mazowe, where she plans to set up a wildlife conservancy.

Since last Friday, investigators from the ZHRC have been sent from pillar to post, travelling to Bindura to seek audience with Mashonaland Central Provincial Affairs minister Martin Dinha, the officer-in-charge Mazowe Police Station and the provincial chief lands officer, with little success.

“It’s been hard to see these people. It has been one excuse after another even though it is known they are all available, they seem unwilling to co-operate,” an insider close to the investigation said.

Dinha was unavailable for comment, with his mobile phone going unanswered.

ZHRC chairperson, Elasto Mugwadi, was, however, optimistic his team would be able to interview the officials soon.

“Our team could not meet the officials yesterday and in particular the Provincial Affairs minister,” he said.

“We have set up a meeting for tomorrow (today), but have been advised by his office that it is subject to his availability.”

“Yesterday (Monday) we wrote to the Home Affairs minister and the Commissioner of Police reminding them that they are in clear violation of a High Court order. We also provided details of the police officers, who are leading the illegal operation,” he said.

“We indicated that we would institute contempt of court proceedings and insist on the incarceration of the police officers involved.”

Donsa-Nkomo said he had also been informed that police had destroyed five homes yesterday.

“I have also just received information from people on the ground that police today (yesterday) destroyed five homes, but for some reason, there are indications that they are moving out of the farm. We are yet to get finer details,” he said.

Police spokesperson, Senior Assistant Commissioner Charity Charamba, said she was yet to get details from officials in Mashonaland Central.

The investigation could open a can of worms in the brutal removal of poor families from Arnold Farm to make way for the expansion of President Robert Mugabe’s family business.

Mugwadi, early this week, confirmed that the human rights body had deployed a team of investigators following reports that the affected families had their homes burnt while they were dumped in the bush in Mvurwi following their eviction last week.

Mugwadi also revealed Dinha and other officials had not been available for interviews.