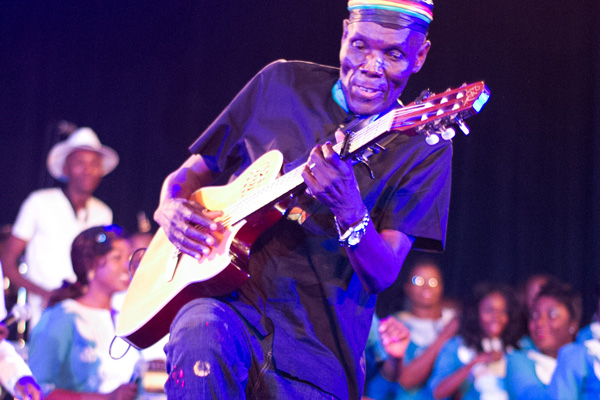 THE festive season brings merrymaking ambiance to many people while musicians’ demand for shows also rises, meaning they have to work extra hard to fulfil the gigs.

THE festive season brings merrymaking ambiance to many people while musicians’ demand for shows also rises, meaning they have to work extra hard to fulfil the gigs.

Among the artistes with busy schedules are sungura maestro Alick Macheso backed by his Orchestra Mberikwazvo and sungura exponent Sulumani Chimbetu and his Dendera Kings.

While some will be taking a rest, for other local musicians it will be business as usually entertaining patrons at different functions and concerts.

United Kingdom-based Zimbabwean jazz musician Tsungi Tsikirai shares the stage with Talking Guitars tonight at The Usual Place bar at Cresta Jameson Hotel in Harare. While some jazz venues have opened up to other genres due to shifting music tastes, The Usual Place has maintained its jazz feel and continues to host a number of jazz musicians.

Sounds of Mbira at CUT Hotel

Mbira queen Hope Masike will be ending the year with a performance at Chinhoyi University of Technology Hotel tomorrow and welcomes the New Year at Dungane Farm in Karoi for a jamboree of mbira fused with dendera as she shares the stage with Sulumani Chimbetu whom she collaborated with on her song titled Tingwarire.

One of the pioneering rhumba outfits in Zimbabwe, Diamond Musica, from the Democratic Republic of Congo, headlines the Zim-Rhumba Festival tomorrow at New Ambassador Hotel.

The Congolese rhumba outfit will share the stage with Madiz, BV Labien and sensational rhumba songbird Lady “Eriza” Storm and her Swag band.

Mbira music lovers are in for a treat on Sunday at Time and Jazz Café located at corner Nelson Mandela Avenue and 6th Street in Harare as it hosts one of the living masters of the mbira instrument, Nyamasvisva and his Mawungira eNharira outfit at a concert dubbed Bira Rekutanga Kwegore.

Sungura maestro Alick Macheso backed by his Orchestra Dendera Kings tonight is in Glendale to entertain merrymakers at Club 007. Tomorrow they take their act to Karoi supported by the Godfather of Sungura Nicholas “Madzibaba” Zakaria before returning to the capital on Sunday to serenade revellers at Extra Mile Leisure Spot.

Dendera ace Sulumani Chimbetu tonight will be in Bulawayo to entertain patrons at Private Lounge. On New Year’s Eve he takes his latest offering Jamboree to the Jameson Victoria Falls Carnival where he will share the stage with some foreign acts. On New Year’s Day he performs at Dugane Farm in Tengwe, Karoi, alongside Mbira queen Hope Masike.

It will be entertainment galore at Golden Peacock Villa Hotel on the New Year’s Eve as Mutare-based top wheel spinners will take turns on the turntables to entertain guest at the hotel.