Crushing dissent not the solution 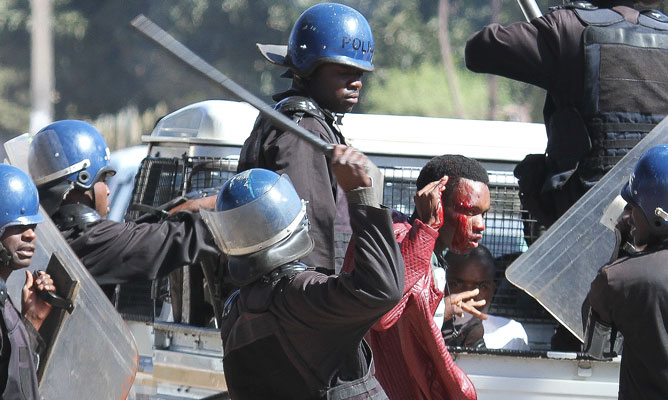 IN light of the seemingly unstoppable rise in dissenting voices in the country, it is clearly emerging that the State’s panacea to these “inconvenient” voices is to crush everything in its way, even if it means adopting an unconstitutional route.

IN light of the seemingly unstoppable rise in dissenting voices in the country, it is clearly emerging that the State’s panacea to these “inconvenient” voices is to crush everything in its way, even if it means adopting an unconstitutional route.

This has been seen through the mass arrest of protesters in Beitbridge. This has been evident in the arrest and subsequent faltering of the supposed treason case against cleric, Evan Mawarire, who was initially charged with inciting violence and ultimately charged with attempting to overthrow a constitutionally-elected government. Even a first-year law student would have picked right away the unconstitutionality of altering charges in court.

However, blinded by rage or perhaps the need to silence the protest movements, the embarrassing legal miscarriage was rightly pointed out by the presiding magistrate. Earlier, before Mawarire’s arrest, pressure group leader, Promise Mkwananzi, had been arrested and charged at the same court.

Back in Bulawayo, the #Beatthepot campaign, fronted by MDC-T vice president, Thokozani Khupe, had to fight a late night legal battle in order to go ahead with the march after police had barred the planned protest. They were only cleared late in a protest that was aimed against hunger, worsening poverty, joblessness and general hardships.

It’s apparent the State would certainly have wanted to stifle the protest. Again, we saw how protesting vendors in Harare were brutalised by armed police at Town House. Currently, jobless graduates have also scheduled a protest march against unemployment. Palpably, the protest would be resisted at every turn.

These mounting protests are a serious indicator of something gone terribly wrong if only the government would have the horse sense to self-introspect. That we have thousands of widely dispersed people, all protesting against the same ills, should set the government thinking.

And the sooner the government sets its eyes on the things protested for, not the protesters, the better. It’s pretty much like we have a state of affairs where children in a home are complaining of the cold, inadequate blankets or poor sanitation to a father.

And, instead of the father directing efforts on the concerns, he resorts to spanking the children, threatening them and throwing them out of the house.

Sadly, this is our current reality. It’s as if to say Zimbabweans should hear-no-evil and see-no-evil yet all that Zimbabweans have known in the past decade-and-a-half is hunger and lack. Zimbabweans have braved hardships of the worst magnitude since 2000. Protesting against hunger or poverty, for the record, is not lack of patriotism.

In the same way that the government prides itself in having been given a governing mandate by the people, it should also take responsibility in addressing the people’s troubles.

Government should be tenaciously focusing on how to weed out corruption. It should be, so far, reviewing what positives have accrued from the heavy police presence on the roads that has, in essence, impacted negatively on tourism. It should be focusing on how to arrest the gigantic corporate malfeasance rampant in its institutions and cutting down on expensive air travel. But instead of our government expending energy on resolving these evils, it rather chooses to splurge on machinery bent on crushing dissent.

Even pronouncements by Zanu PF youths last week that they would ruthlessly deal with protesters are a fine indicator of how lawlessness has been tolerated in this country. We never heard any of their superiors cautioning them against taking the law into their hands.

Fine, they may crush the vendors, arrest all protest leaders and have them incarcerated, but the haunting question still remains: Does this revive the economy and improve the standard of living for the generality of Zimbabweans? What kind of government finds itself at ease governing by decree? Would a proper government be at peace deriding the very people from whence it draws its mandate to govern?

In the case of Mawarire, all that the man has demanded is the right to be well governed. Even the charges of inciting violence would have appeared frivolous and vexatious to any reasonable court. No one denies that the government has the mandate, but with the mandate should come responsibility. The government cannot claim to only want the mandate to rule while neglecting the responsibility for proper governance.

Instead of resolving the economic paralysis, all we hear is their favourite pastime of demonising honest citizens branding them agents of imperialism. There is nothing imperialistic in Zimbabweans seeking to be properly governed. We are all Zimbabweans and no one is more Zimbabwean than the other. No one should and can throw another out of this country for exercising a constitutional right.

The real fight ought to be on the dying economy and not on well-meaning individuals. Crushing dissent won’t mend this economy.

By AMH Voices 21h ago
Letters: Zim’s sanctions a smokescreen