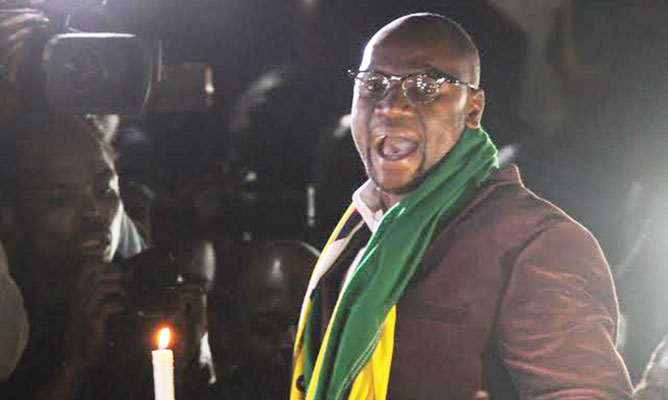 THERE was drama in Harare yesterday when the State’s frantic attempts to charge #ThisFlag campaign leader, Evan Mawarire with subverting a constitutionally-elected government failed to stick, culminating in his release.

THERE was drama in Harare yesterday when the State’s frantic attempts to charge #ThisFlag campaign leader, Evan Mawarire with subverting a constitutionally-elected government failed to stick, culminating in his release.

His day-long court appearance before magistrate Vakai Chikwekwe was also punctuated with drama, after a record 5 000 people thronged the Harare Magistrates’ Court grounds in solidarity with the cleric.

More than 50 lawyers, mostly members of the Zimbabwe Lawyers for Human Rights (ZHLR), also turned up to represent Mawarire.

The State initially charged him with inciting public violence, but later tried to change the charge to seeking to subvert a constitutionally-elected government.

The charges arise from Mawarire’s call for peaceful job stay aways to force the government to address public grievances such as corruption, police brutality and non-payment of civil servants’ salaries.

When Mawarire was brought to the court around 10am, he was initially facing charges of inciting public violence.

But the charges were later changed to subverting a constitutional government in contravention of Section 22(2) of the Criminal Law (Codification and Reform) Act.

Mawarire appeared at the court building under heavy police guard.

Prior to the court hearing, Mawarire was temporarily returned to the police station, because there were too many people, who had come in solidarity with him with their flags flying high.

The changes in the charge attracted disgruntlement from the defence lawyers and members of the public, who had packed the court room. Mawarire’s lawyer, Harrison Nkomo accused the State of ambushing them, arguing his client was “abducted” and never given an opportunity to go through the new charges, thereby, violating his Constitutional rights in the process.

“If there is no caution, the official position is that he hasn’t been cautioned or charged under the said act. Where in the world have you heard of an accused person being brought to court without a charge? We humbly pray for his immediate release your worship,” Nkomo said.

Police also failed to produce the warned and cautioned statement.

However, area prosecutor Jonathan Murombedzi argued the facts in the first warned and cautioned statements were the same, adding the “police preferred a lesser charge, but the State has put a proper charge”.

“It’s not correct to say the accused was abducted. The change of charges did not prejudice him in any way. He will have time to respond to the charge when trial comes. Crafting of charges without any alterations of facts does not mount to an illegal action,” he said.

Following the preferring of harsher charges, Nkomo protested, citing a breach of court procedures — leading to a lengthy court adjournment, as the State sought to put its house in order.

As if to add to the drama, the State, on two occasions, embarrassed itself after the investigating officer indicated he had forgotten some court papers at his home and when the prosecution failed to raise a warned and cautioned statement for the new charge, as required by court procedures.

While the drama was playing out in court, the crowd became impatient, as the proceedings were taking long and stormed the gallery, but were ejected by heavily armed riot police officers.

The crowd braved the chilly winter weather from morning up to Mawarire’s release, as they lit candles and kept vigil, awaiting Chikwekwe’s ruling around 7pm.

They sang, danced and prayed amid tension, as hundreds of riot police officers kept a close watch, with vendors taking advantage of the huge gathering, as they made brisk business selling national flags and refreshments.

When Chikwekwe finally emerged in the evening, he summarily dismissed the case, saying the charge could not stick, as it had been raised while the accused was already in court.

After his release, Mawarire briefly addressed the cheering crowd saying: “The country we are building is ours.”