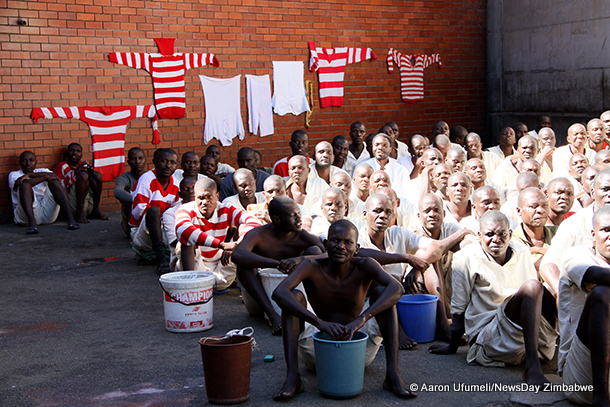 FIFTEEN condemned inmates, some of whom have been on death row for over 14 years, yesterday appeared at the Constitutional Court seeking commutation of their sentences to life imprisonment.

FIFTEEN condemned inmates, some of whom have been on death row for over 14 years, yesterday appeared at the Constitutional Court seeking commutation of their sentences to life imprisonment. BY CHARLES LAITON

They argued that the State had failed to execute them within a reasonable time, but had continued to infringe on their constitutional rights to human dignity and life.

Through their lawyer Tendai Biti, the condemned prisoners said due to the lengthy periods they had been on death row, the State had, in a way, subjected them to severe torture and cruelty in strict violation of sections 51 and 53 of the Constitution of Zimbabwe.

Biti further said the inmates were living in harsh conditions at Chikurubi Maximum Security Prison, which jail was not designed to cater for condemned prisoners.

“The Bible itself is sometimes used as toilet paper and that’s how bad the conditions in our prisons are. But, when one is on death row, there is an extra burden unlike the conditions suffered by other prisoners. Death row is a prison in another prison.”

Biti further said some condemned prisoners were finding it difficult to execute their automatic appeals, resulting in them spending even more than 20 years while waiting to hear their final fates.

“There is caveat that if no one is paying for the processing of the court record to execute an appeal, nothing happens to it and the system just abandons it like that.”

The lawyer said the convicts were being affected by what he termed death row syndrome and phenomenon which he said was as a result of continued psychological torture.

Biti said he was therefore seeking the court’s intervention to declare his clients’ continued incarceration on death row, unconstitutional and order that the inmates be referred to the High Court for re-sentencing.

Representing the State, Olivia Zvedi urged the court to dismiss the application, saying the delays in executing the convicts did not amount to infringement of their constitutional rights.

Zvedi said it was inherent that any person convicted and sentenced to death would suffer psychological trauma and that was an inevitable consequence.

“While I agree that the periods may have gone beyond, it does not therefore mean they have been subjected to inhuman and degrading treatment considering the heinous offences they committed,” Zvedi said.

“While it is accepted that the conditions in prisons are not at their best, the current economic situation is affecting everyone.”

Zvedi further said the situation had been compounded by the fact that there was no hangman despite the post having been advertised on numerous occasions.

She further said, granting the application to have the convicts referred to the High Court for re-sentencing would mean they were wrongly sentenced and, as such, she urged the court to dismiss the application. Judgment was reserved.

Meanwhile, another application by two Harare man, Hilton Chironga and Rashid Stuart Mahiya, seeking to compel the government to enact a law to deal with receiving and investigating complaints from members of the public against members of the security services was also heard and judgment reserved.