MPs gang up against Mugabe 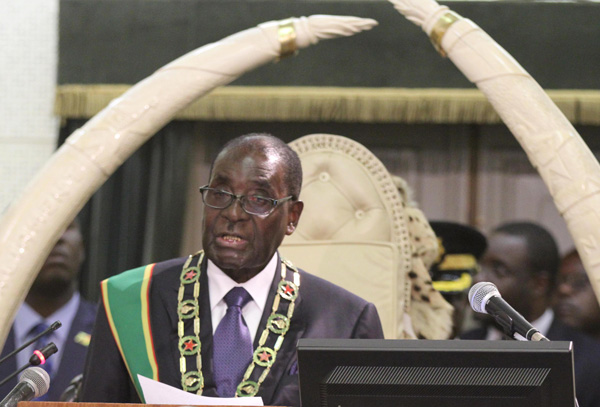 The MPs argued it was unconstitutional for the government to assume a private entity’s debts.

This was after Parliamentary Legal Committee (PLC) chairperson, Jonathan Samukange had issued an adverse report on SI No 77 of 2015 (Presidential Powers) Application of (Chapter 8:14) to Premier Medical Aid Society Regulations, 2015, saying taking over the debts of a private entity was ultra vires (against) the Constitution and the State Liabilities Act. On July 16, Mugabe gazetted the SI which prohibits issuance of attachment orders on State property.

He invoked his Presidential Powers to protect PSMAS properties from being attached by service providers over the debt.

“We looked at the SI as the PLC and our view is that it violates the State Liabilities Act (Chapter 8:14), which states that imposing liabilities on the State can only be done for parastatals or any arm of government,” Samukange said.

“PSMAS is not an institution considered as either a parastatal or an arm of government. It is a private entity consisting of subscribers, some of whom are civil servants.

After presentation of the PLC report, Bikita West MP Munyaradzi Kereke (Zanu PF) urged the House to reject the SI, arguing it would set a bad precedent.

“We want to support the committee and say let us not set a dangerous unstoppable precedent. Let us not cover for institutions and the Executive’s profligacy by taking over their debts.

“The reason why PSMAS is indebted is because of mismanagement and lack of corporate governance.

We know a lot of abuse that led to the indebtedness,” he said.

Buhera South MP Joseph Chinotimba (Zanu PF) proposed the arrest of former PSMAS chief executive officer, Cuthbert Dube and his management and attachment of their properties to recover the money owed to suppliers and service providers.

“This is outright corruption. We are suffering economically, we have no electricity and we cannot afford to help PSMAS. The people implicated for mismanagement should be arrested and their assets sold. Instead of acquiring cancer drugs, we cannot pay to cover for Dube,” he said. Other Zanu PF MPs who trashed the SI include Fortune Chasi (Mazowe South) and Irene Zindi (Mutasa). Bulawayo East MP Thabitha Khumalo (MDC-T) vowed to organise mass demonstrations aimed at blocking passage of the Statutory Instrument. MDC legislator Priscilla Misihairabwi- Mushonga said: “We should be here worrying about providing basic health care to the people and not dealing with private issues of PSMAS. I am disappointed that (Finance minister Patrick) Chinamasa and his deputy are not even in this House as we debate. We should throw this out with the contempt it deserves because it is trivialising us.”