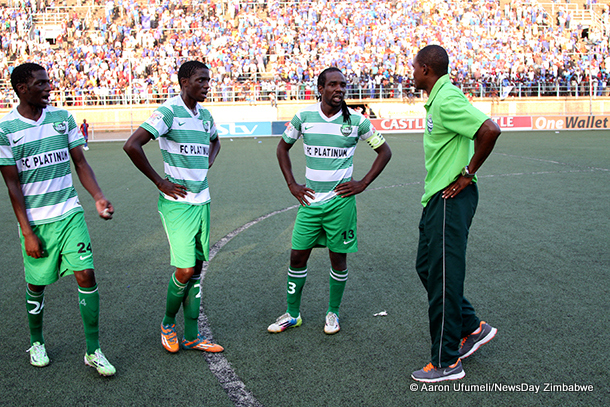 FC PLATINUM begin their defence of the Chibuku Super Cup in what appears to be an easy assignment against troubled Premier Soccer League debutants Dongo Sawmill at Mandava Stadium in Zvishavane tomorrow.

FC PLATINUM begin their defence of the Chibuku Super Cup in what appears to be an easy assignment against troubled Premier Soccer League debutants Dongo Sawmill at Mandava Stadium in Zvishavane tomorrow.

But coach Norman Mapeza will be quick to remember that Dongo gave him a torrid time in a league match on March 21 at the same venue when the new Castle Lager Premier Soccer League side held Platinum to a 2-2 draw.

On that day, the platinum miners came twice from behind to salvage a point from Dongo who are wallowing at the bottom of the log table with just 12 points from 17 games.

Mapeza already has the Independence Trophy in the FC Platinum’s cabinet following Dynamos’ withdrawal from the tournament. Dynamos refused a replay after the final was abandoned with 24 minutes to full time due to a power outage at the National Sports Stadium on April 18.

Dynamos were leading 1-0 when the match was called off.

FC Platinum last year won the CG Msipa Charity Shield, the Independence Trophy and the ZNA Charity Shield. For lifting the Chibuku Super Cup, they went on to represent the country in the 2015 Caf Confederation Cup, dispatching Kenya’s Sofapaka 4-2 on aggregate in February in the preliminary round before being bundled out by Tanzania’s Young Africans 5-2 on aggregate in the first round.

Last year’s Chibuku Super Cup journey for Platinum started with a 3-0 home win over Bantu Rovers who were also coming from Division One.

They edged Caps United 1-0 in the quarter-final through Malawian defender George Nyirenda’s own goal at Mandava, before they dismissing relegated Black Rhinos 1-0 at Rufaro Stadium in a match Walter Musona scored the only goal.

The Zvishavane-based side then bagged the Chibuku Super Cup and $75 000 prize money after beating Harare City 3-1 in a penalty shoot-out after a 1-1 stalemate in regulation time.

Dynamos take on WhaWha in the first round at Rufaro tomorrow after losing the ZNA Charity Shield final 0-1 to Highlanders last Sunday under new gaffer Tonderai Ndiraya.

WhaWha stunned Dynamos 1-0 in a league match at Ascot Stadium, Gweru, in May.

Log leaders Chicken Inn entertain Hwange at Luveve Stadium in Bulawayo tomorrow after Chipangano beat them 1-0 in a league match at the Colliery in May.

Highlanders take on How Mine at Barbourfields, while Caps United lock horns with ZPC Kariba on Sunday.

By Tawanda Tafirenyika 46m ago
HVA wraps up season