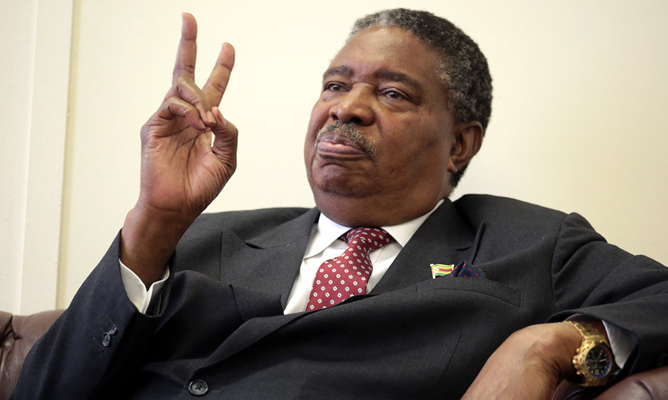 Zanu PF officials, including President Robert Mugabe, are famed for saying anything to win votes, but the two Vice-Presidents crossed the line on Sunday when they told Tsholotho villagers that their marginalisation had to do with the way they vote.

Zanu PF officials, including President Robert Mugabe, are famed for saying anything to win votes, but the two Vice-Presidents crossed the line on Sunday when they told Tsholotho villagers that their marginalisation had to do with the way they vote.

Vice-Presidents Emmerson Mnangagwa and Phelekezela Mphoko told a rally at Mbiriya Primary School in Tsholotsho North that only areas that vote for Zanu PF benefit from government projects.

The utterances would certainly have made a lot of sense to the Tsholotsho villagers who have suffered neglect for the most part of Zimbabwe’s independence because they have traditionally voted against Zanu PF.

Tsholotsho is one of the least developed districts in the country, with a majority of its children not in a position to go beyond Grade 7 because of lack of schools.

The district has probably contributed the highest number of Zimbabwean immigrants in South Africa and Botswana because of lack of job opportunities and general neglect by government.

Tsholotsho North aspiring MP Jonathan Moyo said as much when in apparent frustration he posted on Twitter that the district was still stuck in King Lobengula’s days.

Ideally the visit by Mnangagwa and Mphoko should have assured the long-suffering villagers that they were still part of civilisation, only for them to receive more threats of isolation if they do not vote for Zanu PF in today’s by-election.

The remarks by the two senior politicians do not befit their status and only save to confirm suspicions that the ruling party deliberately sidelines other regions of the country for exercising their democratic right to vote for representatives of their choice.

Besides showing naked contempt for voters, Mnangagwa and Mphoko exhibited a lack of understanding of the role of the State in development and basic tenets of democracy.

The Constitution guarantees all Zimbabweans the right to vote for candidates of their choice in elections and the same supreme law places an obligation on the government of the day to facilitate development in all areas of the country regardless of the political affiliation of the majority of its inhabitants.

Mnangagwa and Mphoko were supposed to be in Tsholotsho North to sell Zanu PF policies to the electorate rather than to make threats.

It happens that Tsholotsho is one of the unfortunate parts of the country that have borne the brunt of Zanu PF’s coercive instruments such as the Fifth Brigade in the 1980s.

The sabotage, killings and curfews conspired to ensure that the district lagged behind in terms of development.

Therefore, the underdevelopment of the constituency has nothing to do with people’s voting patterns, but government neglect.

The two politicians, who claimed to have been representing Mugabe at the rally, should have apologised for Zanu PF’s sins of omission and commission.

Zanu PF has made statements on Bulawayo, which is reeling from massive disindustrialisation and misplaced government priorities that have destroyed the city’s investment prospects.

Bulawayo has five by-elections underway today and voters have been told their vote would determine if they become part of Zimbabwe again.

However, voters are encouraged to go out in their numbers to exercise their democratic right to vote and choose candidates of their choice instead of succumbing to threats from unscrupulous politicians.

Zimbabweans, whether in Tsholotsho or Headlands, have a democratic right to vote for candidates of their choice and they should be allowed to do that without coercion by politicians of whatever size.