2015-01-07
newsday
Drugs, vaccines and blood products are being tried against the disease
BBC News

A trial of a potential drug to treat Ebola has started at a Medecins Sans Frontieres centre in Liberia.

The antiviral – brincidofovir – is being tested on Ebola patients on a voluntary basis. People who do not consent to it receive standard care.

Oxford University scientists leading the research say initial results are expected in the next few months.

A study involving a similar drug – favipiravir – began in Guinea in December.

More than 8,000 people have died from Ebola during this outbreak, the majority in the worst-affected countries of Guinea, Sierra Leone and Liberia.

While a handful of experimental drugs, including brincidofovir and favipiravir, have been given on an ad hoc, compassionate basis in the last year, none has yet been proven to work against the virus in scientific human trials.

A huge international effort – involving the World Health Organization, MSF, drug companies, the Wellcome Trust, and other global health organisations – aims to fast-track treatments that have been identified as potential options.

Prof Peter Horby, one of the chief investigators at Oxford University, said: “Conducting clinical trials of investigational drugs in the midst of a humanitarian crisis is a new experience for us all, but we are determined not to fail the people of West Africa.

“We are trying a number of different approaches simultaneously as there is only a short window of opportunity to tackle this virus during the outbreak.” 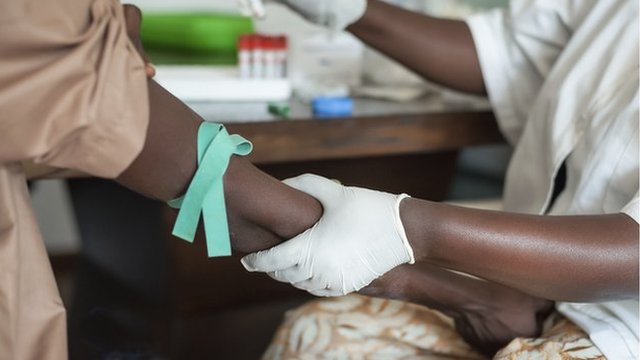 Blood tests are used to establish whether a patient has Ebola

Scientists at Oxford say brincidofovir was chosen because it is effective against Ebola-infected cells in laboratories, has been deemed safe in more than 1,000 patients in trials against other viruses and can be given conveniently as a tablet.

Researchers aim to recruit more than 100 people and will compare death rates at the centre before and after the trial.

The other antiviral drug, favipiravir, being tested by the French National Institute of Health, is already used to treat influenza.

It is offered to all patients who receive care at the MSF treatment centre in Gueckedou, Guinea, and early results are expected in a few months’ time.

Survivors’ blood is screened for diseases before it is used

Other Ebola therapies Scientists are testing other drugs and treatments.

Oxford University and the company Tekmira hope to establish a further study of a potential treatment which aims to interrupt the genetic code of the virus called TKM-Ebola.

Another approach is to use blood plasma from patients who have recovered from the disease. Trials of this are under way in Guinea’s capital, led by the Antwerp Institute of Tropical Medicine. This treatment is also being given to the British nurse Pauline Cafferkey in hospital in London.

And trials involving three separate vaccines designed to prevent people from getting the disease, are taking place in Switzerland, UK, US and Mali.

But while a number of different pharmaceutical attempts are being made to tackle this virus, experts say other strategies – including early and adequate hydration and nutrition – are extremely important.

AMHVoices: Politics is a game with no rules

newsday April 2, 2020
THE political playfield in our country is a game with no rules. It is a game any player can just enter provided ...

newsday March 27, 2020
THE Medical Aid Society of Southern Africa (Masca) is leading an initiative to capacitate Mater Dei Hospital in Bulawayo to establish an ...