Government official arrested over US$60 bribe

The tail of crashed AirAsia flight QZ8501 has been found in the Java Sea, Indonesian searchers say.

The tail houses the “black boxes” – the voice and flight data recorders – which could give investigators clues as to the cause of the crash.

It was found in a secondary search area, lending weight to theories that strong currents have moved the debris.

The plane was lost en route from Surabaya, Indonesia, to Singapore on 28 December, with 162 people aboard.

No survivors have been found.

“We have found the tail that has been our main target today,” search and rescue chief Bambang Soelistyo told reporters in the capital, Jakarta.

“I can ensure that this is part of the tail with the AirAsia mark on it.”

The tail of the Airbus A320-200 was spotted by teams involving divers and unmanned underwater vehicles, he said. It is the first significant piece of wreckage from the crash to be identified.

He added that despite powerful sea currents and murky water, searchers had managed to take photographs of what appeared to be debris underwater.

On one piece, the letter A appears to be painted.

Only 40 bodies have been recovered so far but the authorities believe many of the passengers may still be strapped inside the main body of the plane. 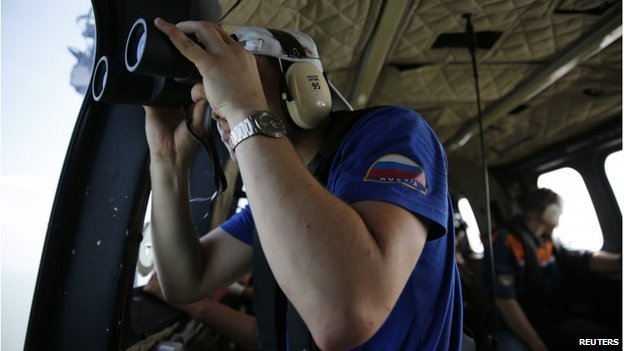 The hunt goes on: a Russian searcher scans the Java Sea with binoculars from a Super Puma helicopter 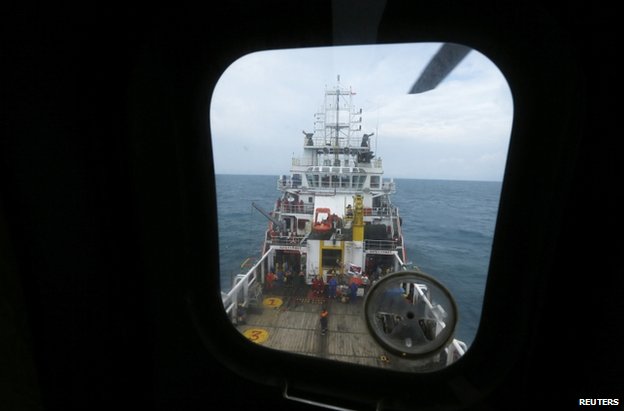 On Tuesday the search area was expanded as search officials suspected that strong underwater currents could be pushing the debris away from the last point of contact with the plane.

The BBC’s Karishma Vaswani in Jakarta says the tail was not found in the area search teams previously focussed upon, but in the expanded search area. This could add weight to that theory, she adds.

A huge international operation with aerial searches and more than 30 ships involved has been repeatedly hampered by poor weather.

“The seas haven’t been very friendly but the black boxes have a 30-day life and they will be able to find them,” Peter Marosszeky, a senior aviation research fellow at the University of New South Wales in Sydney, told Reuters news agency.

“It’s the weather that is causing the delay.”

Some wreckage, including seats and a door, was found floating on the sea.

At the weekend search officials said sonar had detected what they thought were five large parts of the plane.

The cause of the crash is not known but the plane was flying through stormy weather at the time and had requested permission to change course.

Indonesian aviation officials have said that AirAsia did not have permission to fly the Surabaya-Singapore route on the day of the crash.

Investigators said they had found another body on Wednesday, bringing the total recovered to date to 40.

Most of the people aboard the plane were Indonesian: 137 adult passengers, 17 children and one infant, along with two pilots and five crew.

“That makes it harder to do quick identification of the bodies,” he said, quoted by the Straits Times. “We can still do DNA testing but that takes one to two weeks.”

After two weeks, most corpses will sink, he was also quoted as saying by the Associated Press news agency.

AirAsia previously had an excellent safety record, with no fatal accidents involving its aircraft.

AirAsia chief executive Tony Fernandes said on Twitter: “We need to find all parts soon so we can find all our guests to ease the pain of our families. That still is our priority.”

Deceased minor’s hubby out on bail

Deceased minor’s hubby out on bail

Mthuli sets aside $3,25bn for by-elections

Lack of IDs a major threat to elections: Zesn

#Zambia elections: Look no further than Zambia for orderly succession

Why You Should Be Buying Organic Vape Juice: The Pro’s and Con’s

2 school children drown while swimming in a disused pit

This website uses cookies to improve your experience while you navigate through the website. Out of these cookies, the cookies that are categorized as necessary are stored on your browser as they are essential for the working of basic functionalities of the website. We also use third-party cookies that help us analyze and understand how you use this website. These cookies will be stored in your browser only with your consent. You also have the option to opt-out of these cookies. But opting out of some of these cookies may have an effect on your browsing experience.
Necessary Always Enabled
Necessary cookies are absolutely essential for the website to function properly. This category only includes cookies that ensures basic functionalities and security features of the website. These cookies do not store any personal information.
Non-necessary
Any cookies that may not be particularly necessary for the website to function and is used specifically to collect user personal data via analytics, ads, other embedded contents are termed as non-necessary cookies. It is mandatory to procure user consent prior to running these cookies on your website.
SAVE & ACCEPT
Create your own user feedback survey