A tale of loss, hurt and injustice 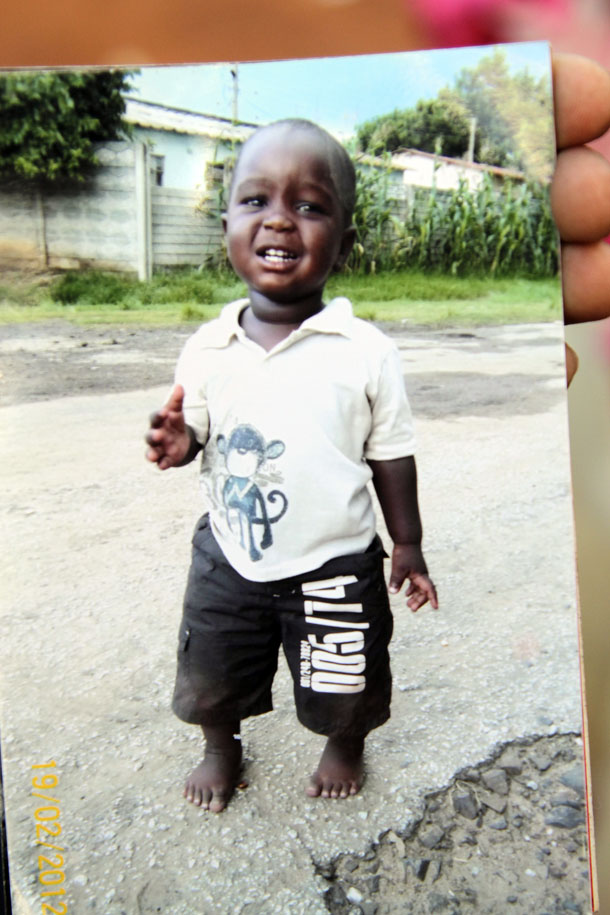 “LIKE any other three-year old, Tanatswa Neil Mutyora was energetic, enthusiastic and full of life."

“LIKE any other three-year old, Tanatswa Neil Mutyora was energetic, enthusiastic and full of life. He loved and was a big fan of the Power FM famous radio presenter ‘Doctor Zobha’, to such an extent that he called his best friend by that name, though he had difficulties pronouncing the name, calling him Mdara Jobhi,” Leona Kiti sorrowfully said, as she struggled to contain her tears.

The mother to Tanatswa, Leona says her life is now empty without her son who tragically passed away on April 22 2014, after commuter omnibus driver Lloyd Kusotera tried to evade police officers and drove his vehicle against a one-way street knocking down Tanatswa who was walking on the pedestrian lane in the company of his 16 year old aunt Samantha Kiti.

The young boy was rushed to the Avenues Clinic and died barely 24 hours later from the injuries he had sustained.

According to the boy’s mother – It was two months before his birthday at the time of his death, and preparations were underway for his birthday celebrations, at the same time he was to be enrolled for kindergarten in January 2015.

Since the death of her son, Leona says she is having a difficult time coming to terms with the loss, – she sometimes hallucinates. “It has been hard for me to come to terms with my son’s departure from this earth. It is even harder for me to explain it to his best friend – Trust, who always comes asking for him,” said Leona, mournfully.

The agonising pain of losing a loved one and coming to terms with it seems to be severely chewing Leona up as she shows visible signs of weariness and misery.

“Each time I tell myself that I am dreaming and that my son is going to wake me up nagging for food and my attention like he always did. Days have since turned into months and though reality is starting to dawn on me I just cannot accept the fact that he is gone and will never come back,” echoes Leona.

Leona cannot get past her anger and denial as she mourns her son’s death.

“I feel so deserted. The joys of motherhood have since departed from me as the memories of the death of my son are still fresh and continue to linger in my mind. He was my only child and it is a painful fate to accept,”

The commuter omnibus driver, Kusotera, was sentenced to two years in prison and ordered to pay an additional $100 fine after he was convicted of culpable homicide and contravention of the Road Traffic Regulations Act.

The sentence can never bring back Leona’s son to her lap, let alone joy to her heart. She feels that a lot should have been done to negligent commuter omnibus drivers who dice with people’s lives.

However, Leona’s husband, Cuthbert Mutyora believes that the courts were too harsh.

In his view, the bus operators are trying to make an honest living at a time the police haunt them for petty issues that cannot be solved by smashing windscreens and throwing spikes on their wheels.

According to Mutyora, justice has to prevail against the police because they caused the sudden demise of his son.

Grieving for his son’s death will remain a part of life and the pain was further exacerbated by the police officials who distanced themselves from being involved in the accident.

“We could had accepted our fate if justice had prevailed, but how can we accept and forget when we strongly believe the perpetrators are walking scot-free and have no remorse over the whole tragedy?” said Mutyora.

“National police spokesperson Senior Assistant Commissioner Charity Charamba was quoted in the media saying that the police was not responsible. She could have let the courts decide and bring the perpetrators to book rather than transferring the offender to another town. I did not attend the court sentence hearing because I believed that the court was biased,” Mutyora added.

“We could have accepted our fate if justice had prevailed, but how can we accept and forget when we strongly believe the perpetrators are walking scot-free and have no remorse over the whole tragedy?” said Mutyora.

After the tragic incident there was a lot of outcry from both the public and the media and this led to national police spokesperson Charity Charamba accusing the media of whipping up sentiment against the police by publishing unverified facts.

Quoted in NewsDay on April 25 2014 over the incident Charamba said, “While the ZRP regrets the loss of the innocent life, we are demanding commuter omnibus drivers not to flee from the police and observe the laws of the country.”

“The ZRP is concerned with the reckless and malicious reportage meant to tarnish the image of the police and to whip up emotions among the public with the intention of turning the same public against the police. At the same time, the ZRP will not allow journalists to advocate for a lawless country. For the record, no police officer was involved in that accident. We expect reporters to verify facts before accusing the police.”

However, Mutyora still hopes that justice is going to be served at the High Court as he was served with summons that the commuter omnibus driver, Kusotera, has since applied for an appeal at the court.

Mutyora was further angered by the fact that he was denied the service of his lawyer from the Zimbabwe Lawyers for Human rights who had come to represent him, he says the only explanation that he was given for the dismissal of the lawyer was that it was a State case.

Thus he felt if it was a State case there was no need for him to foot the medical bill that accrued at the Avenues Clinic.

“Maybe it is me failing to accept my fate, but can Mai Charamba explain how soon after the tragedy police officers were refrained from hitting cars with baton sticks, also, why was the accused and other police officers transferred to other towns, besides why was I given just one police officers’ name by every vendor and kombi driver that was present as being responsible for the mishap?,” further asked Mutyora.

However, several eyewitnesses testified to the involvement of the police to the extent of even naming the policeman involved. On the fateful day Tanatswa was in the company of her aunt who had gone to Megawatt to buy prepaid electricity and were on their way back home when tragedy struck.