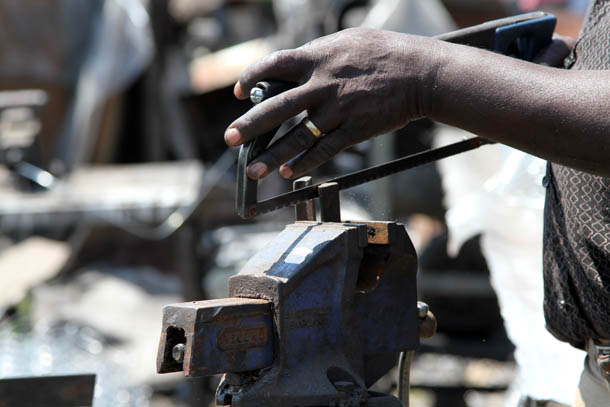 On this sun–drenched afternoon, Highfield is abuzz with men who are hurling chunks of metal- mostly skeletal remains of stripped cars- into trucks that are ready to drive off to a smelting company in the Willowave industrial site.

Heaps of corroded remains of cars, refrigerators and industrial machinery are among the many things that occupy the largely swampy area at the back of the main Gazaland Shopping centre, and a ‘carpet’ of cluttered metal and rubber debris of all sizes and shapes makes most of the small pathways in between the metal heaps.

Hundreds of workers, each in his work space, are all absorbed as they cut, bend, cast, weld, or paint their steel work pieces- which vary from candle holders to ox drawn carts- into finished products

“Although we are not making as much as we would anticipate, but we are generally having good business here that we can afford to send children to school,” said 33 year old Bothwell Mangombe who makes building materials like window and door frames.

Mangombe said one of their main customers were the newly resettled farmers who come to buy their farm implements.

“We are expecting big business as the rain season draws near.”

On one side women running ‘kitchens’( a word used to refer to backyard canteens) are running up and down talking to the workmen and taking orders for lunch that is prepared in the small sheds pitched all over the site.

“During lunchtime, all these people who work here do not have to go anywhere further as we prepare sadza and stew that we sell for only US$1.00,” said a kitchen lady who refused to be named.

Small children, mostly of school-going age are weaving their way through the metal debris and workstations as they sell ‘Freezit’ iced drinks, soft drinks, corn snacks and doughnuts.

Buyers on the other hand are milling around admiring or testing the available products in this busy and somewhat neglected commercial centre.

With over 500 people working here, there is only one public toilet- the other one is closed-, raising serious health concerns as most workers have to rely on private facilities in the beer halls at the main shopping centre.

But that could be the least of their concerns as the site is not officially recognised by the city council authorities despite it producing steel products that are sold countrywide.

The lack of recognition makes it difficult for any of the metal workers’ concerns to be attended to.

Without acknowledgement by the authorities, the workers also fear that another Operation Murambatsvina could befall them.

Executed in 2005 by the Zimbabwean government, Murambatsvina was a process of destroying illegal structures including informal trading sites in the country’s urban areas, which left over 700,000 either homeless or without a source of livelihood.

After starting his trade in the 1990s at Gazaland and having established himself among the informal makers of wheelbarrows, Thomas Nhererwa was left traumatised after all his work items were destroyed.

“After going down in 2005, I decided to come back and start afresh three years ago,” he said, “but we continue to live in fear of yet another operation to destroy informal structures”

Apart from the fear of Murambatsvina, the workers are also failing to access loans to boost their businesses.

“We have not collateral and we are not registered, so banks and other financial institutions usually do not consider giving us loans,” said Caleb Nyamadzawo.

Nyamadzawo appealed to government through the Small to Medium Enterprises ministry to facilitate the formalisation of their operations.