MULTIMEDIA: No dawn yet for a chaos free Harare 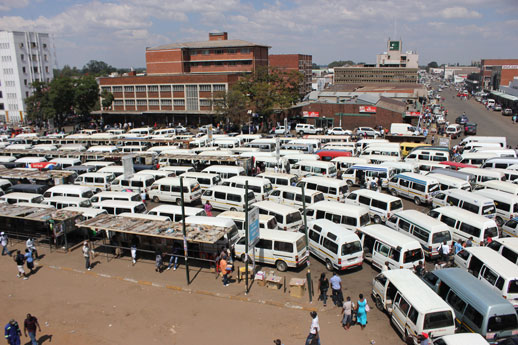 Sadly some of these encounters end up fatal as in a recent incident when a woman was reportedly hit and dragged to death by a minibus whose driver was evading traffic police.

Last week, eleven people were injured, three of them seriously, when a commuter omnibus overturned after overzealous municipal officers threw spikes at it while travelling into the city centre.

According to our sister paper The Standard, members of the public who gathered at the scene immediately meted out instant justice to one of the municipal policemen.

The Zimbabwe Republic Police last week said at least six police officers were injured after being kidnapped and attacked during running battles with commuter omnibus crews in the last three months in Harare.

This is the nature of the conflict, which has escalated after the recent relocation of commuter omnibus operators’ pick-up and drop-off points from all over the city centre to major terminuses.

The operators- who blame the city for the running battles- feel the authorities are being unreasonable when they force all the commuter omnibuses to fit into the few facilities available.

One commuter omnibus driver said because of the congestion of minibuses at the Market Square rank, it can take up to 30 minutes to negotiate a way into the rank, causing unnecessary loss of business.

“We end up making dropping of passengers outside the ranks so that we can make our way back without any delays but this puts us in the firing line of the police who want us to squeeze into the ranks,” said the driver, “ In some cases we have to pay off the municipal or traffic police officers.”

Observers have pointed out the city’s misdirected priorities where they purchase patrol vehicles instead of improving the existing city infrastructure.

The kombi operators eventually hike fares to compensate for the lost business.

Then, there was a well-functioning mass bus transport system under the Salisbury United Omnibus Company which later became the Zimbabwe United Passenger Company (Zupco)

Zupco, which had a fleet of over 1,200 buses on 400 routes in the 1990s, failed to maintain its grip on the city routes due to alleged mismanagement and looting by senior government officials.

This has left the commuter transport system in the hands of private operators who largely own small 15-seater minibuses.

Using the same infrastructure built in the 60s for a then small population, the private commuter omnibuses now serve over 3 million people.

Listen to what the commuters and operators had to say about the situation.

In a visit to the Market Square and Chinhoyi Street ranks, the NewsDay crew witnessed the chaos that continues to characterise the city ranks.

“The solution is not in smashing windscreens, the council is just in denial, they should accept the need to build bigger and better infrastructure,” a Glen View commuter told NewsDay

Apart from bearing the brunt of fare hikes, commuters are often the victims of accidents that happen during the raids.

Last week there was a near fist-fight between commuters and operators as disgruntled commuters attempted to resist commuter operators fare hikes.

The normal fare to local routes is US$0.50, and operators are charging US$1.

Hard-pressed commuters, the majority of whom are informal traders, usually have to resort to hiking private vehicles whose fares are more flexible.

Although Transport Minister Nicholas Goche hinted last week that minibuses would be phased out in favour of a mass bus transport system, the plan appears to be just a pie in the sky as Local Government Minister Ignatius Chombo, who oversees Zupco, said there was no money to implement such a plan.

It then remains a big question to the city council and government, how committed are they to ending this chaos? or rather are they benefiting financially from it, given the heavy fines commuter omnibus operators pay on a daily basis?

To the ordinary commuter, the one who is always the victim, it appears the day is long yet to dawn on a new chaos free Harare where there will be new and enough infrastructure and reasonable commuter fares.